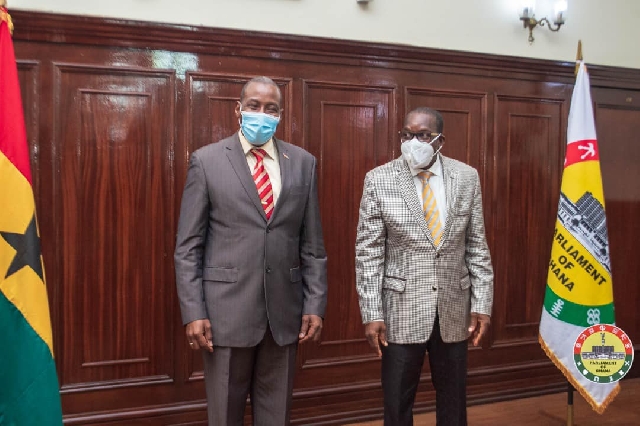 The Cuban Ambassador to Ghana, Pedro Luis Despaigne Gonzalez, has appealed to Ghana’s Parliament to help in negotiating with the American government to end the US Trade embargo on Cuba.

Mr Gonzalez made the appeal when he paid a courtesy call on Ghana’s Speaker of Parliament Alban Bagbin.

Mr Gonzalez made the point that the blockade, which has existed since 1960, continues to have a negative effect on trade in Cuba despite the Caribbean nation’s support to various countries around the world.

Mr Gonzalez disclosed that Cuba is at the third phase of COVID-19 vaccine development trials, adding that the island nation has already deployed doctors to over 40 countries to help fight the raging pandemic.

For his part, Mr Bagbin recounted experiences from an earlier visit to Cuba and stated that the island remains one of the main supporters of Ghana's health delivery system and said this continues to make a major difference in Ghana's health system.

Reference was also made to the numerous Ghanaian medical professionals who are continually trained in Cuba.

The Speaker also commented on the fact that the Parliament of Cuba has 53.2% female representation and pledged to facilitate a visit by selected female MPs from Ghana's Parliament to learn from the Cuban experience.