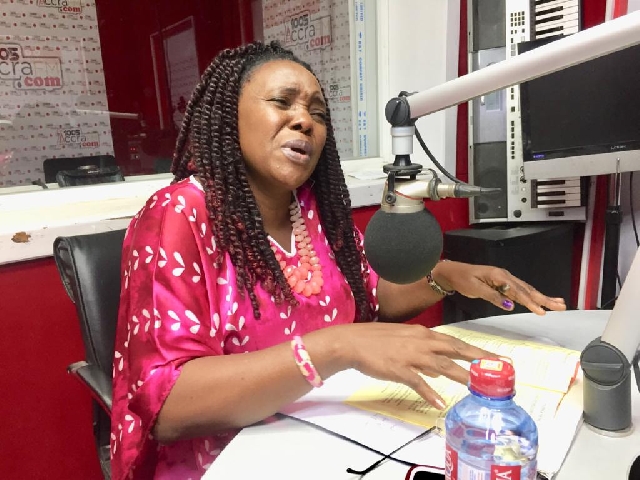 The Member of Parliament for La Dade Kotopon, Ms Rita Naa Odoley Sowah, has said her constituents feel deceived by President Nana Akufo-Addo’s promise that the demolished La General Hospital would be rebuilt in 24 months because of the delay in the start of the project after it was wrecked and the president cut sod for its reconstruction in August 2020.

Answering a question in parliament posed by Naa Odoley Sowah about the delayed project, Health Minister Kwaku Agyeman-Manu said among other things that “after the sod-cutting, they decided to [do] some extra work on the place and they still decided that we need to do some more extra work. This is not the only site where we are seeing this, I can refer you to Komfo Anokye Hospital”.

He added: “The little problem we have at the ministry is that not until some issues with the insurance cover is done, they cannot move to site. Finance Ministry has been informed and they are engaging that the problem would soon be resolved”.

During Mr Agyeman-Manu vetting by Parliaments Appointments Committee for the same portfolio in February this year, Minority Leader Haruna Iddrisu expressed his reservations to the minister-designate at the time about how the site of the hospital has become a “football park” after it was demolished for reconstruction.

“The La [General Hospital], what’s wrong with it?” he asked Mr Iddrisu asked Mr Agyeman-Manu on Wednesday, 10 February 2021, adding: “It’s become a football park, so, what assurance are you giving the people of La and this committee?”

The question from the Tamale South MP followed an assurance by the nominee that “going forward, you will see a few ones [abandoned health facilities] that will come up like the La one [and] the Central Medical Stores…”

Answering the Minority Leader’s question, Mr Agyeman-Manu said “the contractor mobilised to the site” but added that after the Christmas season, “I haven’t been to the site”.

“They haven’t done a site meeting to have brought me a report”, he added.

Mr Iddrisu then advised the nominee to take a tour of the site after his vetting process, to which he responded: “Thank you. Honourable Chairman, you know how I tour this country to see infrastructure, I won’t leave this thing sitting down without me going there”.

Responding to the Health Minister’s various answers to parliiament about the project, however, Naa Odoley Sowah told Kwame Appiah Kubi on Accra100.5FM’s morning show Ghana Yensom on Thursday, 3 June 2021 that “before you award a contract and cut sod for it, you should have done all the preliminary feasibility works concerning the project”.

“It beats my imagination. I don’t get it”, she said, adding: “People come from different areas to access healthcare at the hospital, not just constituents of La Dade Kotopon and the health of the people is paramount”.

“So, you [Health Minister] led the president to come and deceive the people of La Dade Kotopon because you were the then-minister and still are the minister of health”.

“At your vetting, you told us that ‘it is almost complete’ but what at all was happening on the site for you to have told us that it was almost complete? Before your vetting, why didn’t you visit the various locations to be abreast with whatever is going on there but you come and sit before the vetting committee and deceive the people of La Dade Kotopon, deceive the people of Ghana, which is very much uncalled for”, she fumed, asserting: “He [Agyeman-Manu] has not been truthful to us. The minister lied at his vetting”.

The president cut the sod for the commencement of the La General Hospital Redevelopment Project on Tuesday, 10 August 2020.

At the ceremony, the president indicated that the redevelopment project has been occasioned by a report from the Ghana Health Service, which indicated that the five-storey structure had developed gaping cracks, which made the facility unfit for use.

Furthermore, the unplanned nature of the entire hospital campus required that it be re-organised so that it can function efficiently as a 21st-century hospital, which will serve the needs of residents of La and its adjoining communities.

“This facility, in so many ways, complements the Greater Accra Regional Hospital at Ridge, and its upgrading will serve most people from Osu through La and Teshie, as well as residents living along the coastal corridor of Accra,” he said.

President Akufo-Addo continued: “Indeed, with admissions to this hospital arising from maternal health and other related complications increasing from 20.5% in 2008 to 30% in 2017, and with pregnancy and related conditions for the first time in the history of the life of this hospital being the number one cause of admission”, there was the need to “improve, rapidly, the facilities of this hospital”.

The project is being financed by a credit facility from Standard Chartered Bank of the United Kingdom, with an export credit guarantee from Sinosure of the People’s Republic of China, to the tune €68 million, with an insurance cover of €3,860,349.18.

The project will be undertaken by the Chinese company Poly Changda, which has wide-ranging experience in China and other parts of Africa in the construction of healthcare facilities.

Upon completion, it will be transformed into a 160-bed facility and it will be fitted with an outpatient department, inpatient wards, maternity and neonatal services; surgical unit with 4 theatres, accident and emergency department; public health department, pharmacy unit, laboratory, administration, imaging area with CT Scan, X-ray room, ultrasound, fluoroscopy, mammography units, physiotherapy unit and a mortuary

To the chiefs gathered at the ceremony, the president assured them that “this project is a sign of greater things to come for La, and, indeed, for the whole nation”, adding that: “The government’s commitment to the total development of Ghana is absolute” and “I expect that all of us gathered here will be present, again, God-willing, for the commissioning of this project once it is completed.”