Election petition: Mahama files for review of ruling on application for interrogatories 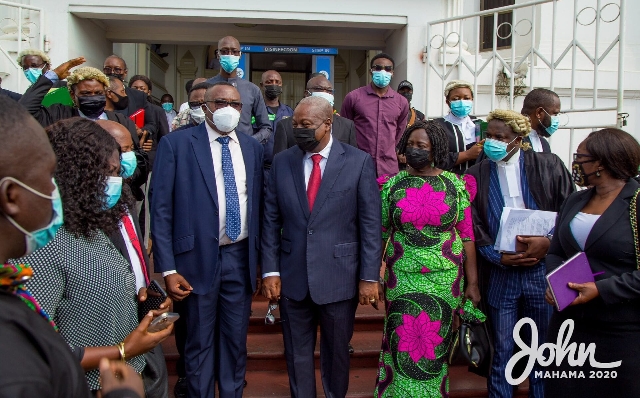 In this new application, Mr Mahama is asking for a review of the ruling on the application for interrogatories

The 2020 Presidential candidate of the National Democratic Congress (NDC), John Dramani Mahama, has filed an application to ask the Supreme Court to review its decision to disallow him from asking the Electoral Commission (EC) certain questions at the ongoing hearing of the 2020 election petition.

Lead Counsel for Mr Mahama, Mr Tsatsu Tsikata on Wednesday, 20 January, 2020 informed the court about the filing of the application.

In order to do the review, the court would have to empanel two additional Supreme Court Justices.

The Supreme Court, on Tuesday, 19 January, 2020, dismissed an application to serve interrogatories on the Electoral Commission filed by former President John Dramani Mahama who is the petitioner in the ongoing election petition.

In the application for interrogatories, Mr Mahama was seeking the court to allow him ask the EC certain questions ahead of the hearing of the substantive matter.

Some of the questions included the manner in which the results of the 2020 presidential polls were transmitted and the involvement of the National Communications Authority (NCA) in the transmission of the presidential results.

But both the lawyers for the Electoral Commission and President Nana Akufo-Addo opposed to the application.

They argued that John Mahama and his legal team were using the “back door” to seek further information from the EC that were not captured in their petition.

The court subsequently dismissed the application.