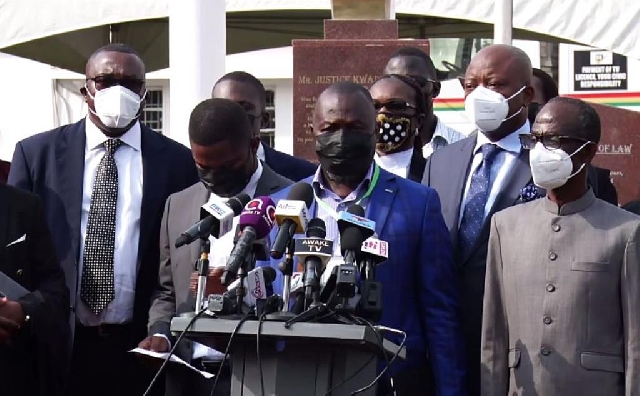 Lawyers for former President John Dramani Mahama, the petitioner in the ongoing election petition, have described as “wrong”, the Supreme Court ruling on Tuesday, 16 February 2021, which said that their client cannot reopen his case after having closed it earlier.

“In our view, the court was wrong; in our view, the reasons of the court were based upon wrong legal premises but the Supreme Court is the final decision-maker when it comes to the law and we are bound by what it said. We cannot depart from it but the lead counsel for the petitioner has indicated that he’s filing an application for review with respect to the earlier decision rendered on the 11th of February relating to their decision with effect to the compellability of the witness testimony of the Electoral Commission,” Dr Dominic Ayine, a member of Mr Mahama’s legal team told the press after Tuesday's ruling.

"As we’ve already indicated in this ruling supra, the petitioner in this application has not given us an inkling of the new or fresh evidence he wants to bring to the fore through the Chairperson of the first respondent and how that evidence could assist the court to do justice to the matters under consideration in this petition. Neither has he disclosed how that evidence will advance the cause of his petition. For the above-stated reasons, we find no merit or favour in the petitioner’s application to reopen his case for the sole purpose of compelling his adversaries’ intended witness to testify through a subpoena without indicating the sort of evidence he intends to solicit from the said witness and how that evidence is going to help the court in resolving the dispute before us. We accordingly refuse the application and proceed without any hesitation to dismiss it", the CJ added.

Mr Mahama’s lead counsel, Mr Tsatsu Tsikata, had argued in court on Monday, 15 February that his side intended reopening the case so that it could subpoena the Chairperson of the Electoral Commission, Mrs Jean Mensa, as a “hostile” or “adverse” witness if leave had been granted by the court to his side’s prayer.

Mr Tsikata also insisted that for the sake of the God Mrs Mensa worships, it was important for her to mount the witness box.

In his counter-arguments against the reopening of the case, Mr Justin Amenuvor, lead counsel for the EC said allowing Mr Tsikata to cross-examine Mrs Mensa as a hostile witness would be an abuse of the legal process.

Also, Mr Akoto Ampaw, the lead counsel for President Nana Akufo-Addo, the second respondent in the case, argued that the party that bore the burden of proof, “as the petitioner does in this matter, must effectively meet that burden of proof”.

Prior to Monday’s hearing, Mrs Mensa, the star witness of the first respondent, the EC, deposed to an affidavit opposing Mr Mahama’s push prayer to the apex court to reopen his case.

The affidavit said the EC “decided that it would not waste time and effort over the tottering case” of Mr Mahama, “hence, my decision not to testify because there was nothing to testify about”.

Mrs Mensa added: “The 1st respondent is opposed to the said application and says that the application is not warranted by any rule of law or procedure and the same should be dismissed by this honourable court”.

“I am advised and verily believe that the application does not show sufficient reason for the court to permit the petitioner to reopen his case. I am advised that reopening a case is not a remedy for the asking; the applicant must show the harm to be suffered if the case were not reopened. The petitioner skipped this requirement”.

“Again, I am advised that the petitioner’s lawyers were confident when they closed his case without reservation, and this court ought not to permit proceedings before it to drag unduly on the basis of a party’s afterthought and inability to prove its case in court,” the affidavit said.

“The 1st Respondent Commission decided that it would not waste time and effort over the tottering case hence my decision not to testify because there was nothing to testify about”.

“Again, the petitioner deposes in support of his case to matters concerning ‘the biometric verification process for which huge sums of taxpayers’ money was spent.’ These are matters that have sprung up in this application for the first time and do not form the basis of the petitioner’s petition”.

“I verily believe that there are more convenient fora (forums) for ventilating the so-called public interest issues and further that this should not form the basis of the petitioner re-opening his case in a presidential election petition in court”.

“The petitioner deposes in the supporting affidavit further that this court has the power to summon me, as a witness. I am advised and verily believe that the application is an abuse of this honourable court’s process insofar as it does not tell this court whether I am needed as a witness for the petitioner or for the 1st Respondent or what I am required to say”.

“I verily believe that this court has power to call a witness suo motu but not a party, let alone a party adjudged to have a vested right to decide not to testify”.

“I am opposed to the petitioner being granted leave by this honourable court to re-open a case that he closed of his own volition without compulsion”.

“I am advised that even if this court grants leave for the petitioner to reopen its case; it ought not cause a subpoena to be issued against me because a subpoena is issued with coercive effect,” Mensa noted.