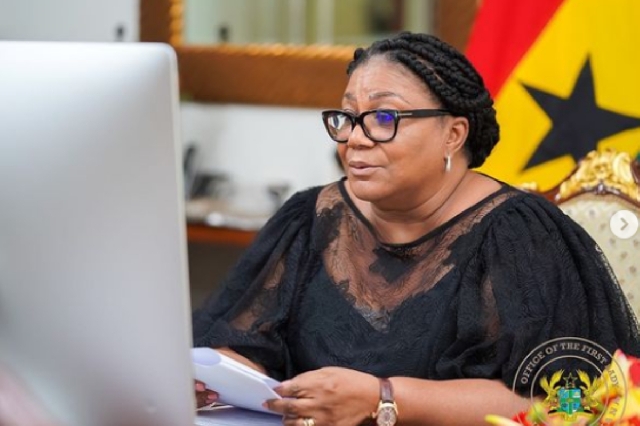 Ghana’s First Lady, Mrs Rebecca Akufo-Addo, according to statement from her office dated Monday, 12 July 2021 and signed by Korkor Bleboo, Director of Communications at the Office of the First Lady, has “decided not to accept any monies that have been allocated to be paid to her pursuant to the recommendations of the Ntiamoa-Baidu committee, as approved by Parliament”.

“She is doing this as a purely personal decision, without prejudice to the rights of others, and not to undermine the propriety of the process undertaken by Parliament”, the statement said.

Apart from that, the statement also announced that: “The First Lady, in consultation with the President of the Republic, has decided to refund all the monies paid to her as allowances from the date of the President’s assumption of office, i.e., from January 2017 to date, amounting to GHS899,097.84.”

The statement said Mrs. Akufo-Addo did not request to be paid any allowance, adding: “She only received that which existed and attached to her status, albeit informally.”

Her decision, according to the statement, is also borne out of the public outrage and negative commentary about the recommendations, which, in her opinion, seek “to portray her as a venal, self-seeking and self-centred woman, who does not care about the plight of the ordinary Ghanaian.”

A few days ago, former President John Mahama said the recommendation by the Ntiamoa-Baidu committee to pay cabinet-level salaries to the wives of President Nana Akufo-Addo and Vice-President Mahamudu Bawumia, is captured “as part of the emoluments of the President and the Vice-President”, adding: “This seems like an attempt to sneak” Mrs Akufo-Addo and Mrs Bawumia “into the article 71 officeholders’ group”.

“This is clearly problematic”, the former president said in an article expressing reservations about the recommendation.

According to the 2020 presidential candidate of the main opposition National Democratic Congress (NDC), “It should be made clear, also, that the recommendation in respect of spouses in the Ntiamoa-Baidu Committee report, which covers the years January 7, 2017 to January 6, 2021, is solely in respect of the Spouses of President Akufo-Addo and Vice-President Bawumia”.

“The challenge, however, is that the spouses of the President and Vice-President are not captured among Article 71 Officeholders and, therefore, there is no legal or constitutional basis for it”, he said.

The issue of handling spouses of political officeholders is not a new one; it has engaged the attention of all governments since the advent of the 4th Republic.

Under various administrations, considering their sensitive positions, there had to be a consideration of how to support the spouses of the President and the Vice-President in fulfilling  the roles that our modern democracies expect them to play, such as empowering women, girlchild education, reproductive health issues, teenage pregnancy, assistance to widows, fighting early marriage, preventing mother to child transmission of HIV, STEM for girls, and even as far as the welfare of grandmothers banished to witch camps.

The practice, thus far, has been that some expenses of the spouses of the President and Vice-President, in carrying out their expected roles, are funded by the Office of the President. This includes fueling of vehicles, security, clerical staff, stationery, hosting of local and foreign guests and all such expenditures.

In the first Government of the 4th Republic (the Rawlings Administration), some recommendations were made to provide allowances to the spouses of the President and Vice-President and, additionally, as a gesture of reconciling with our past, the spouses of former Presidents and Heads of State.

This week, a raging issue that has generated passionate debate among many Ghanaians, both on social media and in the traditional media space – TV and Radio – has been in respect of a report, confirmed by the government that the spouses of President Nana Akufo-Addo and Vice-President Dr Mahamadu Bawumia, are to be placed on a monthly salary at the level of a cabinet minister.

We are told that the 7th Parliament of the Republic of Ghana, which was dissolved at midnight of January 6, 2021, approved the recommendation in the report of the Presidential Committee on Emoluments for Article 71 Officeholders (January 2017 to December 2020), chaired by Professor Yaa Ntiamoa-Baidu.

The news, particularly at this time of austerity, has generated some level of outrage among the populace, and I can understand the anger of those opposing the recommendation of the Ntiamoa-Baidu Committee and its subsequent approval by parliament.

It should be made clear, also, that the recommendation in respect of spouses in the Ntiamoa-Baidu Committee report, which covers the years January 7, 2017, to January 6, 2021, is solely in respect of the Spouses of President Akufo-Addo and Vice-President Bawumia.

The challenge, however, is that the spouses of the President and Vice-President are not captured among Article 71 Officeholders and, therefore, there is no legal or constitutional basis for it.

It should be noted that the recommended salaries for the Spouses in the Ntiamoa-Baidu report are captured as part of the emoluments of the President and the Vice-President. This seems like an attempt to sneak the First and Second Ladies into the article 71 officeholders’ group. This is clearly problematic.

The question then is: if the Committee recognises the above, and, therefore, appreciates that there can be no legal or constitutional basis for seeking to bestow any such benefits on the spouses of the President and Vice-President (VP), why then did it proceed to provide for the payment of monthly salaries pegged at the level of a cabinet minister to both the First Lady and wife of the VP, who served in the period 2017 to 2020, even if it was conveniently enveloped as part of the emoluments of the President and Vice-President?

And why did Parliament also approve, as has been reported, this recommendation without a review?

Article 71 is an entrenched clause in the 1992 Constitution and nothing short of a referendum can be used to amend or vary that clause as per article 290 of the Constitution. The Committee, and indeed the Government, cannot use a short-cut to circumvent well laid-out constitutional rules.

As earlier mentioned, it is a fact that over the years, successive governments have continued the convention of providing the offices of the First Lady and Second Lady with allowances. The practice has included the payment of quarterly allowances to the surviving spouses of former Presidents, former Vice-Presidents and former Heads of State, which practice has been appreciated by the beneficiaries as a token from the State.

Anyhow, if the government wishes to formalise these allowances, it must bring some form of enabling legislation to back these payments, noting that best practice in other democracies do not support payment of salaries to spouses of officeholders.

This debate also brings back to the fore my oft-repeated position that the recommendation for the establishment of an Independent Emoluments Commission must be carried through.

I believe that instead of trying to unconstitutionally enlarge the scope of Article 71 officeholders for the purposes of determining emoluments, the government must as a matter of urgency set up the Independent Emoluments Commission.

To provide some background, the establishment of an Independent Emoluments Commission (IEC) was a recommendation of the Constitution Review Commission in 2011. It was endorsed in the Government’s White Paper and both the Edu-Bandoh and Ntiamoa-Baidu Committee made a case for its urgent establishment. In fact, I am on record to have championed this position.

If this proposed Independent Emoluments Committee is established, the Commission will not only stop the practice of setting up a new emoluments committee every four years and coming up with varying recommendations but will ensure that salary administration in Ghana is rationalized and equity is brought into the system.

To emphasise this point, let me share a recommendation from the Edu-Bandoh Committee Report: ​​“The future of public sector salary regimes needs to be built on the guiding principles outlined in this report in determining and making recommendations on the emoluments of Article 71 Officeholders for 2013 – 2017. It is important that salary adjustments of all public sector workers take into account such principles as equity and fairness, productivity, cost of living, motivation, ability to pay, as well as accountability, among others. The future of fixing salaries of office holders in the Ghanaian public sector will be strengthened if the guiding principles are upheld in all sectors for the realisation of equity and fairness in the public sector salary administration.”

The times are dire, and the economy is under severe stress. Any attempt to broaden the scope and for that matter turn the spouses of the President and VP into permanent office holders, in addition to the support provided to their offices, would appear unreasonable.

I recall that I entered the 4th Republican Parliament in the same year as President Nana Akufo-Addo. As a young MP, I remember we debated an amendment to the Assets Declaration Law to expand its ambit. One of the groups targeted for addition was spouses of public office holders including the President, Vice-President, Ministers among others.

Leading those who vehemently opposed the inclusion of spouses was President Akufo-Addo. I remember one of the main thrusts of his argument was that a spouse could not have known that their partner would end up in high office at the time they got married. It would, therefore, be unfair to subject them to the hazards of an assets declaration regime (it would be in the Hansard somewhere).

Have the chickens come home to roost? A spouse may not have known that their partner would end up in high office at the time of marriage, so, would it not be unfair to bestow upon them salaries as part of their husband’s emoluments in office?

Finally, it has also been indicated that the First and Second Ladies have been receiving allowances from 2017 to date. Should the government choose to ignore the cries of the citizenry, as seems to be the pattern of the day, steps must then be taken to ensure that the committee’s recommendations are not retroactively applied, leading to double payments.