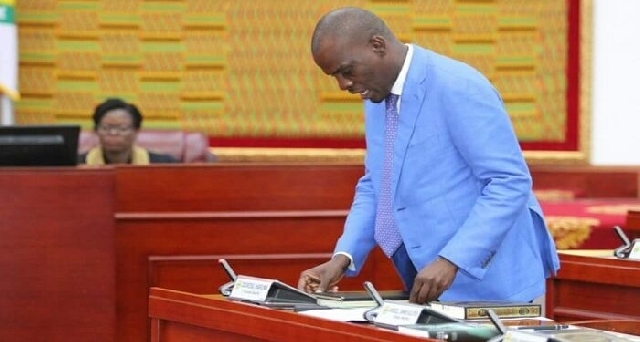 The leader of the National Democratic Congress (NDC) caucus in parliament, Mr Haruna Iddrisu says his side has no difficulty sitting on the left side of the Speaker in the Chamber.

"Let me assure the Ghanaian people that the NDC 137 MPs have no difficulty sitting to the left of the Speaker so long as our numerical strength is respected and respected in the composition of committees and in the determination of leadership of committees, whilst we continue to pursue legitimate legal and constitutional processes to procure what we deserve as a majority party, someone will say, what is on the left or what is on the right, we have no difficulty at all," Mr Iddrisu said at a press briefing in Parliament on Thursday, January 14, 2021.

He also stated that despite the fact that the Fomena MP Andrew Asiamah Amoako, who is an independent MP has officially written to do business with the NPP caucus in Parliament, it does not make the NPP side the majority in Parlaimnet.

“Advisedly and wisely, he is not seeking to join a political party and therefore nobody should do an easy mathematics of a 137 plus one. I will cooperate, or I will collaborate does not mean I am joining, or I am crossing over because it has its own constitutional implications which probably will require that a by-election be conducted if he was to join a political party,” Mr Iddrisu indicated.

In his view, both parties still have 137 seats apiece in Parliament and therefore the NPP cannot claim to have majority seats in the House.

The Independent Member of Parliament for Fomena, who has also been elected second deputy speaker of the eighth Parliament Andrew Asiamah Amoako has officially written to the Speaker informing him of his decision to do business with the New Patriotic Party (NPP) caucus in parliament.

This comes as the two sides engaged in endless debates over who has the majority and is entitled to sit on the right side of the Speaker.

Both the NPP and the NDC have 137 seats each in the house with no clear majority.

But the NPP through MP for Effutu, Alexander Afenyo Markin has written to the Speaker to declare their side the majority because the Fomena MP has agreed to do business with them giving them 138 seats.

Although the Fomena MP had told the media he was going to work with the NPP, there was no official communication to that effect to Parliament.

However, on Wednesday, 13 January 2021, the lawmaker wrote to officially confirm his position.

The letter read: “I Andrew Asiamah Amoako an independent MP for Fomena constituency and now the second deputy speaker for the same parliament do hereby declare that I shall for purposes of transacting business in the house, associate with the NPP caucus in the 8th parliament.”

“For the avoidance of doubt, I do hereby affirm that I shall cooperate and collaborate with the NPP caucus in parliament,” it added.