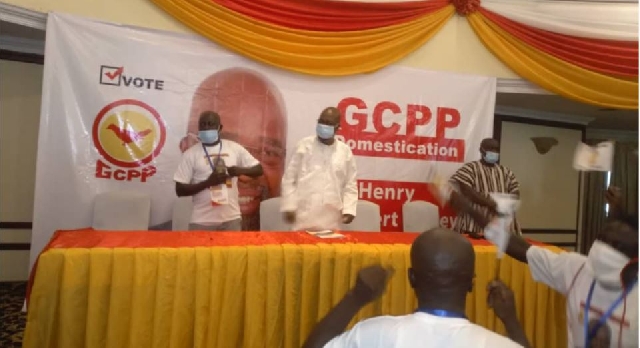 The Great Consolidated Popular Party (GCPP) has acclaimed Dr Herbert Henry Lartey as its flagbearer for the 2020 presidential election.

Ghana goes to the polls to elect the next president and parliament of the Republic on December 7.

The Electoral Commission of Ghana recently fixed the filing fee for presidential candidates at GHS100,000.

The 100% increase in filing fee from the GHS50,000 of 2016 to a GHS100,000, has received a backlash from the NDC, CPP, CDD-Ghana and some other political parties, who are of the view that the huge amount could be a potential breeding ground for corruption and an attempt to weaken minority parties.

But speaking on the sidelines of the 6th National Delegates Congress of the GCPP in Accra, the third-time flagbearer of the party, Dr Henry Lartey, told Class News that his party is capable and ready to pay the filing fee.

"I am not surprised, I knew that the EC was going to go up, I cannot force the EC to reduce it.

The GCPP leader promised to "establish a University of Agriculture at Techiman in the Bono East Region while going into solar power production in the area of energy".

Meanwhile, the GCPP has also endorsed the legalisation of 'Okada' but wants the motorbikes to be manufactured in Ghana.

The General Secretary of GCPP, Mr Citizen Ato Dadzie, said: "If we want to legalise Okada, then we must also manufacture motorbikes in Ghana aside our domestication policy to eat what we grow and grow what we eat. As for our industrialisation agenda, it is not only One District, One Factory but rather One Constituency, One Factory, we'll establish 275 factories, if elected".

According to Mr Dadzie, GCPP will "introduce school farms and establish the Pan African University of Solar Energy to champion renewable energy agenda. We'll make solar energy the cornerstone of the Ghanaian economy".

National Executives of the GCPP were also acclaimed and announced by the Electoral Commission.