Galamsey: Akufo-Addo won't spare anybody, be they NPP or NDC bigwigs – Jinapor 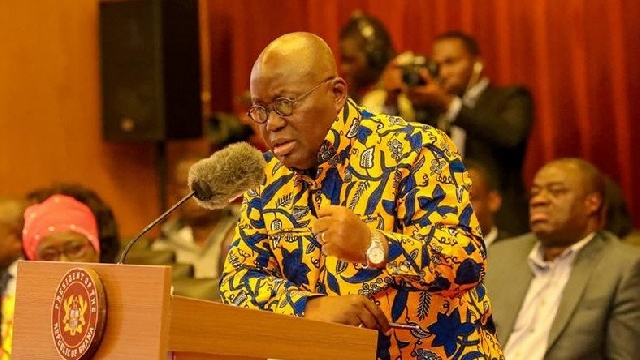 President Nana Akufo-Addo will not spare anybody in his galamsey fight, be they bigwigs of the governing New Patriotic Party (NPP) or main opposition National Democratic Congress (NDC), the Minister of Lands and Natural Resources Minister, Mr Samuel Abudalai Jinapor, has said.

In a discussion with metropolitan, municipal and district chief executives in the Western Region on the first day of his tour of the area, the Damongo MP said: “I want to assure you that the president’s resolve on this matter is unequivocal and a fact, and he has said it and I want to repeat it that nobody is above the laws of this country”.

According to him, “the president and his government are determined that whoever is involved in this illegality will be” brought to book.

“It doesn’t matter who the person is; he may be an NPP bigwig or an NDC bigwig or a government appointee or [me], too; the sector minister, or the deputy ministers that I will be working with”, he added.

He said the “officials of the ministry and the MMDCEs are going to watch each other and nobody will be above the law.”

President Nana Akufo-Addo recently said his fight against illegal small-scale mining will not be based on hearsay and unsubstantiated allegations.

At a national dialogue on small-scale mining organised by the Land and Natural Resources ministry in Accra on Wednesday, 14 April 2021, President Akufo-Addo, who has been criticised in the past for letting some of his appointees, who have been accused of aiding and abetting galamsey activities go scot-free, said he will only act on such whistle-blowing based on evidence.

“I’m determined to enforce the laws of illegal mining no matter the subject – high or low”, the President said.

“I’ll, however, not act on hearsay or mere allegations without more”, he noted.

However, he added: “I will not hesitate to act, though, when the evidence is hard before the police and I would do so irrespective of the standing of the person or persons involved”.

That, according to him, “is the true meaning of equality before the law”.

Mr Akufo-Addo also said: “I want to build on the modest progress made in my first term”.

“I want to learn from our shortcomings and receive productive input from this forum for purposes of enhancing the regulation of the sector”, he noted.

He said: “Out of this consultative dialogue, I hope we’ll build a national consensus around a national policy on small-scale mining”.

Hopefully, he noted, “at the end of the day, we should be able to build a broad-based national consensus around the necessity to stamp out the menace of illegal small-scale mining and the need to support and grow a responsible small-scale mining”.

Read the president's full speech below

ADDRESS BY THE PRESIDENT OF THE REPUBLIC, NANA ADDO DANKWA AKUFO-ADDO, AT THE OPENING OF THE MAIDEN NATIONAL CONSULTATIVE DIALOGUE ON SMALL-SCALE MINING HELD AT THE ACCRA INTERNATIONAL CONFERENCE CENTRE, ACCRA, ON WEDNESDAY, 14TH APRIL 2021.

I thank the energetic, new Minister for Lands and Natural Resources, Hon. Samuel Abu Jinapor, Member of Parliament for Damongo, for convening this national consultative dialogue on small-scale mining, and for the invitation to deliver these remarks. We have come from far and near, and from across the political divide, because of the importance we attach to the subject matter, and because of our collective determination to find a convergence of minds on the way forward.

My views on the matter are well-known and well-documented. However, certain occurrences, especially in the run-up to the election of 7th December last, have inspired my insistence on the whole nation having a national conversation on galamsey, and I thank each and every one of you for making it to this consultative dialogue.

I want to begin by emphasising one point. Mining can create jobs; mining can improve livelihoods, and mining can generate wealth. But it cannot, and must not do so at the expense of damaging the very environment that produces the riches.

We have to acknowledge that Ghana is not made up of only the humans, but is also made up of the soil, the mountains and valleys, the forests, the rivers, the lakes, the seas, and the plant and animal life as well. Without them, we, humans, cannot, and will not, survive; and so they also need nurturing. We have to acknowledge that the natural environment has as much a right to be here as we humans do.

In many parts of the world, stories abound of wildlife returning to rivers and lakes, parks and gardens, and even to some town and village centres, as people retreated into lockdowns or cut back on open public activities because of COVID-19. There is clearly a contest between us, humans, and the natural environment, and it is a lesson we must collectively confront.  We must adapt to co-existing in peace and harmony with nature. This is the time to help rejuvenate our land, the time to take a careful look at how we use the land, the time to revisit our farming and building practices, and, yes, the time to address the issue of galamsey.

I have said it on many occasions, and it is worth repeating. The Almighty has blessed us with precious minerals in our land. It is not surprising, therefore, that mining has always been part of our lives.

There is nothing wrong with mining, or trying to exploit the minerals we have been blessed with to develop our country. A substantial part of the revenue of the central government comes from mining. Indeed, the central government is always trying to find innovative ways to maximize the earnings from mining in order to provide public infrastructure.  Families, too, depend on incomes from mining activities to put food on the table.

Mining becomes problematic and dangerous, when methods employed pose a danger to the land, the water bodies, and the very lives of the people. Mining becomes a danger to the society when, after extracting the gold, diamond, or other stones and minerals, the land is left degraded and poisoned with toxic materials, the water bodies are turned into entities that can no longer support life, and plants and fish cannot survive in our rivers. Mining becomes a danger to the society, when the sites are abandoned, leaving behind craters filled with mercury and other poisons, which cannot support anymore fauna or plant life.

We have had beautiful and majestic rivers and streams. Today, there is not much to celebrate about the Pra or the Birim, and there is not much to be excited about over our famed thick forests and the animals that inhabit them. Unacceptable mining and logging practices have laid them to waste.

When I called for a national conversation on galamsey, which, eventually, has led to the holding of this dialogue on the theme “Sustainable Small-Scale Mining for National Development”, it is not because I have any doubts about the need to protect our lands and our environment. It is because I want us to have a consensus on a sustainable method of mining the minerals in our land. We cannot have one part of the political divide campaigning for galamsey in the bush, and the other waging an official fight against galamsey in the open.

We must demonstrate that we love our land, and are capable of taking care of it ourselves. We do not need foreigners to campaign for the protection of Ghanaian land, our inheritance. We do not need special interest groups to campaign for the protection of Ghanaian soil, flora and fauna. It is the land of our birth, it is the land we inhabit, it is the land that supports our lives and livelihoods, it is the land we named Ghana at independence sixty-four (64) years ago, and we, the Ghanaian people, must be its best protectors. We must mean it when we sing with pride Owura Amu’s song….”Yɛn ara yɛn asaase ni; ɛyɛ abuoden ma yɛn. Mogya naa nananom hwiegu nya detoo hɔ maa yɛn.... “This is our land; it is dear to us. Our forebears gave their blood so we would inherit it.”

Fellow Ghanaians, it is absolutely crucial that deliberations at this consultative dialogue be candid and devoid of partisanship or narrow parochial interests. Hopefully, at the end of the day, we should be able to build a broad-based national consensus around the necessity to stamp out the menace of illegal small-scale mining, and the need to support and grow responsible small-scale mining. There are aspects of our national life which are fair subject matters of partisan politics.  We must, however, come to the understanding that small scale mining, and the requirement to do away with illegalities in that sector, should be beyond partisan politics.  Some subjects simply cannot be part of our everyday politicking, and I urge this forum to insist that illegal small-scale mining, and matters relating to it, should be one of such issues requiring national effort.

Government has a major responsibility to this end, as we are accountable for the stewardship of this sector, as, indeed, we are of all other sectors of national life. I am determined to enforce the laws on illegal mining no matter the subject, high or low. I will, however, not act on the basis of hearsay or mere allegations without more. I will not hesitate to act, though, where the evidence is hard before the Police, and I will do so irrespective of the standing of the person or persons involved. That is the true meaning of equality before the law.

We want to build on the modest progress made in my first term. We want to learn from our shortcomings and receive productive inputs from this forum for purposes of enhancing the regulation of the sector. Out of this maiden consultative dialogue, I hope we will build a national consensus around a national policy on small scale mining, that promotes a responsible, viable, environmentally-sustainable small-scale mining industry, which has discarded the use of mercury, chanfans and excavators, which has barred the involvement of foreign nationals, and which has rejected the destruction of our forests, environment and water bodies.

This vision of what small-scale mining should be must have the support of the entire nation.

I urge this colloquium to be bold and forthright in its deliberations.  In other words, say it as it is. No subject or person should be above critique. Politicians, traditional authorities, policymakers, media, so-called influential people, should all not be beyond your scrutiny.

At the end of the day, what the Ghanaian people expect from this process are solutions which will assist in dealing with this endemic problem.  I have confidence in the integrity of the people gathered in this room and I am sure that, out of your deliberations, a workable blueprint will be produced.

Accordingly, ladies and gentlemen, I declare the first national consultative dialogue on small scale mining duly launched, and I wish you well in your discussions.

May God bless us all, and our homeland Ghana, and make her great and strong.

I thank you for your attention.