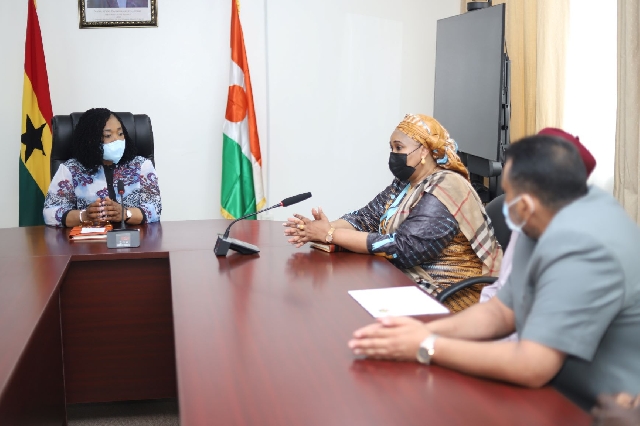 Shirley Ayorkor Botchwey in a meeting with Ambassador-Designate of the Embassy of the Republic of Niger, H.E. Mrs. Lamido Salamatou Bala Goga.

The government of Ghana has condemned the attack on the presidential palace in the Republic of Niger.

It would be recalled that Ghana, in February 2021, donated 100,000 units of election thumbprint pads to the Niger Independent National Electoral Commission (CENI) toward the country’s conduct of the second round of the presidential election.

The swearing-in of President-elect Mohamed Bazoum on Friday, will be the first transfer of power between two democratically-elected presidents in Niger since the country became independent in 1960.

Ahead of the event, Ghana’s Minister of Foreign Affairs and Regional Integration, Shirley Ayorkor Botchwey, noted: “I think this is something that we must commend Niger for because it went in for the first and second round”.

“We, as Ghana, had to come in to support with some electoral materials and we gladly did that because of how we treasure the relations between our two countries,” she said at brief ceremony in Accra to officially receive an open letter from Ambassador-designate of the Embassy of the Republic of Niger, Mrs. Lamido Salamatou Bala Goga.

The minister also took the opportunity to state Ghana’s position on the foiled coup plot, saying: “The president [of Ghana], as ECOWAS Chair, condemns all forms of unconstitutional moves to remove a government”.

“Africa, West Africa, have gone past that and it is not something that should be entertained at all”, she said.

The Ghanaian minister noted: “If people are not happy with the system, they should wait until it is time for elections and then speak their minds at the ballot box”.

And, so, she noted, “it is something that is strongly condemned from our end as chair of ECOWAS and I believe that all the ECOWAS heads of states and the countries will condemn this kind of behaviour”.

Ms Botchwey also emphasised the government of Ghana's commitment toward consolidating existing friendly ties and expanding the scope of economic and technical cooperation between the two countries and assured Niger of Ghana’s commitment to work with that country toward maintaining the excellent relations existing between the two countries, as well as consolidating the peace in the sub-region.