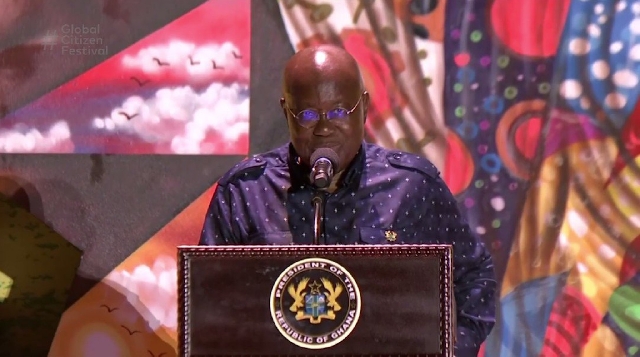 This year’s Global Citizen Festival held in Accra, Ghana, on Saturday, 24 September 2022, saw some disgruntled Ghanaians using the occasion to stage a protest of sorts against President Nana Akufo-Addo.

No sooner had the Ghanaian leader begun to address the huge crowd gathered at the Black Star Square than a section of the crowd started booing at him and chanting ‘away!’ amidst jeers.

After the jeers subsided, the President continued with his speech in which he urged the youth to support the government in achieving the 17 Sustainable Development Goals (SDGs).

“We have a limited window of opportunity to act decisively to lift millions of people out of poverty, promote inclusiveness and equality and safeguard the health of our planet,” he said.

The President also used the opportunity to announce the launch of a $1-billion fund called the African Prosperity Fund in collaboration with the Southern African government.

“It will fund strategic and transformational projects on the continent in the areas of infrastructural development, financial access and participation of women and youth, education healthcare, technology and sustainability so that we leave no one behind in Africa,” he said.

Ghana’s first-ever Global Citizen Festival marked the 65th anniversary of the country’s independence. It is in this spirit of self-determination and unity that Accra’s Global Citizen Festival at the Black Star Square brought together artistes and world leaders to achieve an ambitious policy agenda focused on empowering girls and women, defending the planet, and creating change.

The Global Citizen Festival started as a music festival where fans take action to end extreme poverty in order to earn free tickets to attend.

The inaugural Global Citizen Festival took place on September 29, 2012, with 60,000 in attendance on the Great Lawn in New York’s iconic Central Park.

Since then, artists like Rihanna, Beyoncé, JAY-Z, Pearl Jam, Stevie Wonder, Coldplay, Billie Eilish, and many more have performed on the Global Citizen Festival stage.

The concert is timed to coincide with the UN General Assembly to leverage opportunities to get policy and financial commitments from government, corporate and philanthropic leaders.

Tickets to the festival are awarded through points earned by taking actions to fight extreme poverty, such as signing petitions, calling your political representatives, participating in challenges, and more.

The 2022 Global Citizen Festival called on world leaders at the United Nations General Assembly and ahead of the G20 and COP27 in November, to step up and invest $600 million into the future of women and girls, close the $10-billion climate financing shortfall, deliver $500 million to help African farmers respond to the global food crisis, and provide urgent relief for crushing debts to End Extreme Poverty NOW.