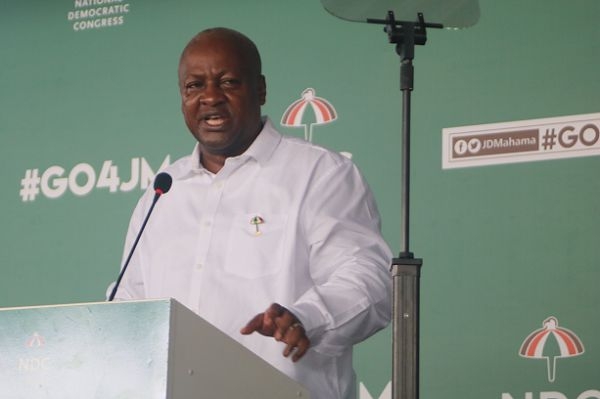 The flagbearer of the National Democratic Congress (NDC), Mr John Dramani Mahama, has said should he win the 7 December polls, his next government will see to the retrieval of arms and weapons from pro-New Patriotic Party (NPP) vigilante groups.

The retrieved weapons, he noted, will be given to the security services to beef up their logistics and weaponry so they can combat crime in the country.

Speaking at an NDC town hall meeting in Kumasi on Tuesday, 15 September 2020, the former President said: “We will give the guns and bulletproof vests that the Invisible Forces and Delta Forces are using to threaten us, to our military and policemen to fight armed robbers”.

He also promised to investigate the deaths of the late Abuakwa North Member of Parliament, J. B. Danquah-Adu and investigative journalist Ahmed Hussein-Suale.

Though the J.B. Danquah-Adu case is pending in court while investigations are underway in the Hussein-Suale case, the former president said he will “ensure swift investigations into the cases” if he is re-elected.

Additionally, Mr Mahama pledged to reopen radio stations closed down by the current administration and ensure freedom of speech and expression when given the nod in the December polls.

“All radio stations shut down by Nana Addo will be opened to ensure press freedom.

“So, Radio Gold, Montie FM and all the others will be operational again,” he noted.