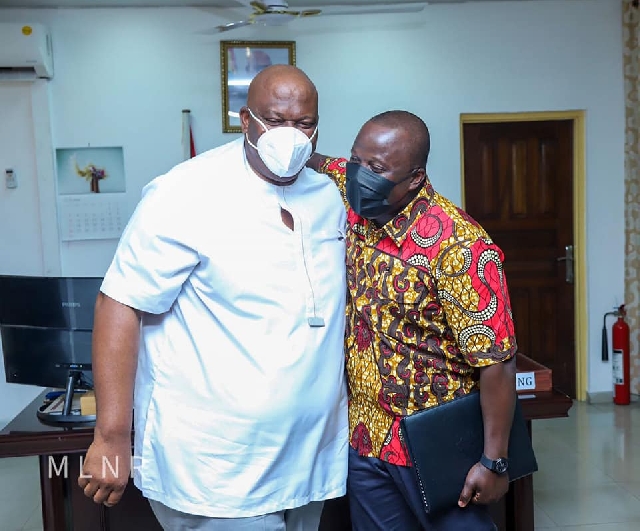 Mr Jinapor said: "I will support you in all forms and ways necessary to make Accra and Ghana a better place for all of us."

The minister declared this when he paid a courtesy call on the Regional Minister on Tuesday, 19 October 2021 at the Regional Coordinating Council in Accra.

In his interaction, Mr Jinapor said he will throw his weight behind the Regional Minister to ensure they come to grips with the diverse issues pertaining to land administration in the region.

He added that issues relating to land administration in Accra which are more adverse than illegal mining, are great matters of concern to President Nana Addo Dankwa Akufo-Addo and, therefore, he is going to ensure that more attention is paid to in that regard.

He said: "Issues relating to ineffective land administration is somehow more adverse than illegal mining with a lot of economic implications and it is here in Accra that we have some of the major issues."

Outlining them, Mr Jinapor said: "Land guard system, multiple sale of lands, general acrimony and litigation relating to lands, encroachment on lands and all these are matters of great concern to the President and his instructions are very clear that we deal with these matters."

For his part, the Regional Minister, Henry Quartey commended Mr Jinapor, describing him as a dynamic hard-working Minister.

He said the Minister of Lands has set good standards with his tour of the Regions so far and also praised him for the Green Ghana Initiative.

The Regional Minister disclosed that the President will launch Operation Clean Your Frontage, a program that will see to the adherence to cleanliness in various homes.

The launch he said will be on Friday, 22nd October 2021 on the sidelines of the President's tour of the Greater Accra Region later this week.

He explained that the operation will see some good sensitization in the latter parts of the year to be followed by implementation in the early months of next year, 2022.

He added that with regards to this operation and other programs to be embarked on by his council, some 3000 city response team members will be trained to help bring sanity and sanitation to the streets of Accra.

Mr Quartey also mentioned that the relocation of the Agbogbloshie market women has contributed immensely to Ghana coming out of the gutters of dirt.

In view of keeping a good name of Accra being a clean city, he employed the opportunity to request 1,000 to 1,500 acres of land, which he disclosed will be used to build an ultra-modern facility for the relocation of Abossay Okai spare parts dealers.