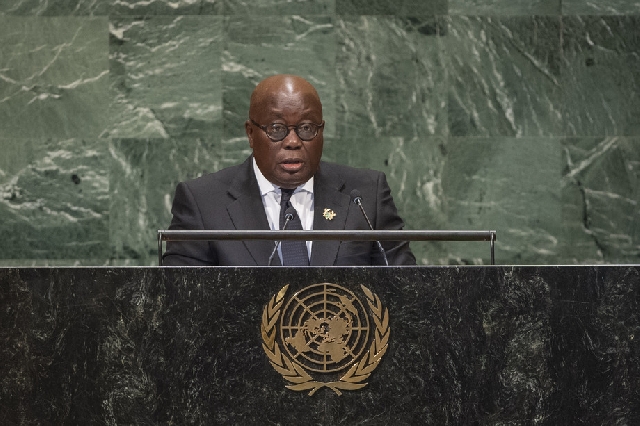 President Nana Addo Dankwa Akufo-Addo has told the UN General Assembly that Ghana is not only building “new oil refineries” but also adding value to her natural resources, as part of the country’s industrialisation drive.

Speaking at the 77th session of the United Nations General Assembly on the theme: “A Watershed Moment: Transformative solutions to interlocking challenges”, on Wednesday, the 21st of September 2019, in New York, the Ghanaian leader said: “We know that industrialisation is the way to go and, with the single market as the added incentive, we have taken policy measures in Ghana to add value to our natural resources”.

For example, he noted, “we are processing more of our cocoa, refining more of our gold, and we are determined to exploit the entire value chain of our huge lithium deposits”.

Also, Mr Akufo-Addo said: “We are busily building an integrated bauxite and aluminium industry and an integrated iron and steel industry, building new oil refineries and have, so far, attracted six (6) of the world’s biggest automobile manufacturers to set up assembling plants in Ghana, prior to producing them in the country”.

Read his full speech below:

ADDRESS BY THE PRESIDENT OF THE REPUBLIC OF GHANA, NANA ADDO DANKWA AKUFO-ADDO, AT THE 77TH SESSION OF THE UNITED NATIONS GENERAL ASSEMBLY, ON THE THEME “A WATERSHED MOMENT: TRANSFORMATIVE SOLUTIONS TO INTERLOCKING CHALLENGES”, ON WEDNESDAY, 21ST SEPTEMBER, 2019, NEW YORK.

Mr President, I congratulate you on your election to lead us through this 77th gathering of the General Assembly of the United Nations. I wish you the best of luck, as you take on this onerous task at this most difficult period of the world.

Mr President, as we would say in Ghana, our world is currently not in a good place. The World Bank observed, last Thursday that the global economy was enduring its steepest slowdown since 1970.

Two years ago, our world came to a thundering halt, as we cowered from a health pandemic from an unknown, malicious virus, coupled with a devastating global economic pandemic. High budget deficits were no longer a concern of only developing nations.

By 2021, COVID-19 had pushed Africa into the worst recession for half a century. A slump in productivity and revenues, increased pressures on spending and spiralling public debts confronted us without relent.

As we grappled with these economic challenges, Russia’s invasion of Ukraine burst upon us, aggravating an already difficult situation.

It is not just the dismay that we feel at seeing such deliberate devastation of cities and towns in Europe in the year 2022, we are feeling this war directly in our lives in Africa. Every bullet, every bomb, every shell that hits a target in Ukraine, hits ou pockets and our economies in Africa.

The economic turmoil is global with inflation as the number one enemy this year. It hit a 40-year high in the US and UK in recent months.

There is record inflation in the eurozone.

Several African countries have inflation rates surging three to four times higher than what they were just two years ago. In Ghana, we are experiencing the highest inflation for 21 years. The high costs of food are hurting the poor, especially the urban poor, the most.

Moreover, the spillover from central banks raising interest rates to combat inflation has been severe beyond borders, as global investors pull money out of developing economies to invest in bonds in the developed world.

This has led to depreciating currencies and increased borrowing costs; meaning we need to raise and spend more of our own currencies to service our foreign debts in US dollars.

It has become clear, if ever there was any doubt, that the international financial structure is skewed significantly against developing and emerging economies like Ghana.

The avenues that are opened to powerful nations to enable them take measures that would ease pressures on their economies are closed to small nations.

To make matters worse, credit rating agencies have been quick to downgrade economies in Africa, making it harder to service our debts.

The tag of Africa as an investment risk is little more than, in substance, a self-fulfilling prophecy created by the prejudice of the international money market, which denies us access to cheaper borrowing, pushing us deeper into debts.

The financial markets have been set up and operate on rules designed for the benefit of rich and powerful nations, and, during times of crisis, the façade of international cooperation, under which they purport to operate, disappears.

These are the savage lessons that we have had to take in, as the world emerged from the grip of the coronavirus to energy and food price hikes, and a worldwide rise in the cost of living. The necessity for reform of the system is compelling.

Mr President, I am a modest student of history, and I would say it is doubtful that any generation of inhabitants of this earth has ever witnessed such a perfect storm of global economic chaos, a war with global consequences, and an unwillingness or inability to find a consensus to deal with the catastrophe.

It is under such circumstances that we have gathered under the theme: “A Watershed Moment: Transformative Solutions to Interlocking Challenges.”

The problems we face are, indeed, many, and vary in level of importance, depending on where you are in the global order of things. Just last year, the focus was on energy transition. This year, it is about energy security, as Europe goes back to burning coal to replace Russian gas.

Nevertheless, we do not have the luxury of being able to pick and choose which big problem to solve. None of them can wait; the economic turbulence requires urgent and immediate solution; the turmoil and insecurity in many parts of the world require urgent attention; and so does the need to tackle the problems posed by climate change.

A watershed moment, indeed, it is, and history will judge us harshly if we do not seize the opportunity to make the changes that will enable us deal with the many problems we face.

Mr President, a case in point is the destabilising conflict in the Sahel. It might look to many, today, as a local conflict which affects only the countries in that region.

We, in Ghana, know differently; we have watched, in horror, as the unrest has moved from the Sahel, inexorably, to the West African coastal countries. All of Ghana’s neighbours have suffered terrorist attacks, and some have lost territorial space to the invading forces.

Furthermore, the terrorist pressure has provided a pretext for the unhappy reappearance of military rule in three (3) of the fifteen (15) member ECOWAS Community, two (2) of whom have borne the brunt of the terrorist outrages in the Region – Mali and Burkina Faso. It is a development we are determined to reverse, so that the ECOWAS space remains a democratic one.

All of us in the Region are being forced to spend huge amounts of money on security.

This is money we should be spending on educating and giving skills to our young people; on building much-needed roads, bridges, hospitals and other such infrastructure, which we are spending to fight terrorists or to keep them out from destabilising our countries.

This is a global problem deserving the attention of the world community for a global solution. Mr President, I am contributing to this debate on a date that has special significance for us in Ghana. 21st September is the date we mark the birth of our first President, Dr Kwame Nkrumah.

He would have been one hundred and thirteen (113) years old today, and it is worth recalling on this day the driving force of his political career, which was to contribute to the birth of a united Africa, i.e., a United States of Africa.

We recognise today, more than ever before, the importance of the strength in unity of Africa, and we are working to shed that image of a helpless, hapless continent.

There is a renewed commitment towards an inclusive and sustainable industrialisation and economic integration and the intensity of the challenges we face today is only matched, like never before, by the immensity of the opportunity before us. We, the current leaders of Africa, should be determined not to waste the crisis that confronts us.

Incidentally, 2022 is billed as Africa’s Year to take action on food and nutrition development goals. We see the current geopolitical crisis as an opportunity to rely less on food imports from outside the continent and use better our sixty per cent global share of arable lands to increase food production.

We have seen the devastating impact of relying on Russia and Ukraine for seventy per cent of our wheat consumption.

We have enough land, enough water, enough gas and enough manpower to produce enough fertiliser, food and energy for ourselves and for others.

But, we also recognise that we cannot do it all by ourselves. Our message to the global investor community is, therefore, this: Africa is ready for business. Africa needs you and you need Africa. You need Africa because Africa is busily building the world’s largest single market of 1.3 billion people.

Soon, we will have a customs union, and soon we will have a continental payment system that will accelerate and facilitate trade amongst ourselves. Already, goods and services are flowing more freely across our artificial borders. See Africa for what it is: the new frontier for manufacturing, for technology, for food production. That is why six years ago, I launched, in Ghana, the successful policy of ‘One District One Factory’.

A policy, with government incentives, that has directly seen, so far, some one hundred and twenty-five (125) factories being set up in various districts across the country, leveraging each area’s competitive advantage.

That is why, six years ago, my government embarked on an aggressive policy of planting for food and jobs, which has helped our farmers increase their yields in folds. Indeed, we are recognising that many of the things we import can be found or produced in Ghana, or in other African countries.

The African Continental Free Trade Area, whose Secretariat is located in Accra, Ghana’s capital, is driving intra-Africa trade and creating an unparalleled momentum for our continent’s economic diversity and transformation.

We know that industrialisation is the way to go and, with the single market as the added incentive, we have taken policy measures in Ghana to add value to our natural resources.

For example, we are processing more of our cocoa, refining more of our gold, and we are determined to exploit the entire value chain of our huge lithium deposits.

We are busily building an integrated bauxite and aluminium industry and an integrated iron and steel industry, building new oil refineries and have, so far, attracted six (6) of the world’s biggest automobile manufacturers to set up assembling plants in Ghana, prior to producing them in the country.

In line with the African Union’s Agenda 2063 and the United Nation’s Sustainable Development Goals (SDGs), Africa’s ambition is to transform our food systems over the next decade, anchored in the Comprehensive Africa Agriculture Development Programme (CAADP) and the Malabo Declaration on Accelerated Agricultural Growth.

What we require now is support from the investor community for the rolling out of Africa’s lucrative agro-industry, and for the community to see agribusiness in Africa as much more an opportunity than the perceived, exaggerated risk which has been the false, but dominant narrative.

In conclusion, Mr President, on 25 July 2016, the United Nations General Assembly adopted Resolution A/RES/70/293, proclaiming 2016-2025 as the Third Industrial Development Decade for Africa (IDDA III), with UNIDO tasked to lead it in collaboration with a range of partners.

I believe it is time for the UN to take proper stock of this initiative and ask a few searching questions, recognising what could have been achieved with greater commitment and focus.

Working together, we can get our world back into a better and happier place.

I thank you very much for your attention.