I prefer 'reckless' media to 'sparing' one – Akufo-Addo 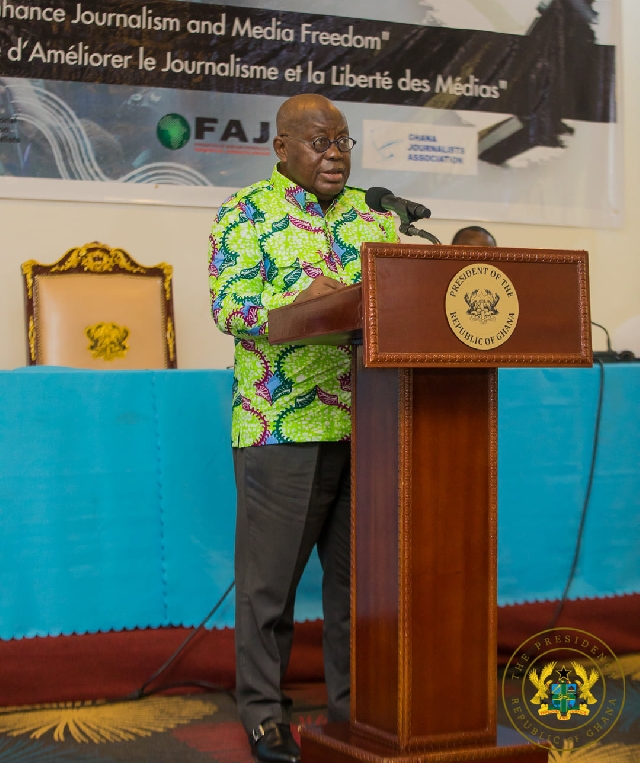 President Nana Akufo-Addo says he prefers a “vibrant and reckless” media in Ghana and the rest of Africa to a praise-singing and a sparing one.

In his special guest of honour address at the African Journalists Leaders’ Conference organized by the Federation of African Journalists (FAJ), today the 1st of June 2021 at the Alisa Hotel, under the theme: “Building Stronger Unions to Enhance Journalism and Media Freedom”, President Akufo-Addo said as President of the Republic, he will continue to ensure the safeguarding of the freedoms of journalists as they go about their work.

“I maintain that I prefer a boisterous, even reckless media to a sparing one,” President Akufo-Addo said.

“As President of the Republic, I have seen to the passage of the right to information Act, which is meant to give effect to Article 21 (1) f of the Constitution of the Republic, which states “All persons shall have the right to information subject to self-qualifications and laws as a necessary in a democratic society”. Several preceeding administrations have shied away from taking such a step” President Akufo-Addo added.

President Akufo-Addo noted that “the culmination of all these have meant that the Ghana citizen through the presence of a dynamic media is able to give boldly and freely his or her feedback on policies and programmes of government. Civil society groups are able to interrogate fearlessly government actions and positions, compare them to best global practices and offer views and critiques in complimenting efforts of government and the political opposition is able to raise decent openly, canvas for alternative viewpoints and by so doing, offer our citizens alternatives to consider on all key issues of our national discourse”.

In his remarks, President Akufo-Addo observed that there is a new developing trend in the media landscape on what constitutes an attack on the media. He indicated that to the extent that the media is allowed to criticise and take on officialdom and the rest of the citizenry means that the media should also be ready to accept review and criticism of it work from the citizenry and officials of State.

“However, there seem to be an emmerging narrative which is being proffered by some in Ghana that critiquing the work of a journalist constitutes an attack on media freedom. That certainly cannot be described as an attack on media freedom. Having the freedom to criticise and oppose should also mean that the media is ready to accept and work with criticism of its work by citizenry or officialdom. That for me is one of the surest ways of improving the public discourse of our respective countries and we should all strive towards realising this” President Akufo-Addo further noted.

President Akufo-Addo took advantage of the international gathering of journalists to solicit the support of journalists on the African continent to pay attention in the reportage to three issues he says are of continental significance for which the committed partnership of the media and African governments is needed.

“These are all menaces to the health, progress and stability of our nations and continent. We should stand shoulder to shoulder in ridding our continent and nations of them”, President Akufo-Addo suggested to attendees of the conference.

The Federation of African Journalists is the regional organization of IFJ affiliates in Africa – providing a vital collective voice in defence of the social and professional rights of all African journalists.

Founded in 2007, FAJ provides support and solidarity to unions and associations with a mandate to promote trade union development in the media industry in Africa, to address professional issues, to protect and defend freedom of expression and the right to information as well as journalists’ human rights, as laid down in the Declaration of Principles of Freedom of Expression in Africa.

FAJ, as the largest organisation of African journalists, is a vital representative voice at a Pan-African level, speaking for journalists at the United Nations, UNESCO and AU. FAJ activities are governed by its constitution adopted by the triennial Congress which also elects a steering committee and officers.