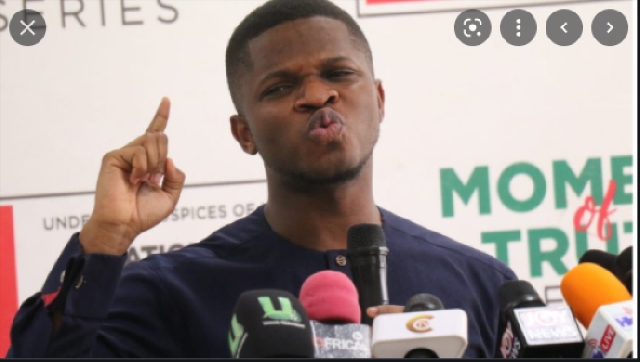 The NDC said it is “utterly appalled by the decision of the insensitive Akufo-Addo/Bawumia-led government to reverse benchmark value discounts on selected imported goods, effective 4th January 2022.”

According to the NDC, the reversal of benchmark value discounts is a draconian policy that will adversely affect the living conditions of all Ghanaians irrespective of their social backgrounds and political affiliations.

The National Communications Officer of the NDC, Mr Sammy Gyamfi, said these at a press conference in Accra on Wednesday, 5 January 2022 in reaction to the government’s decision to reverse the 30 and 50 per cent discounts on benchmark values of imported vehicles and general goods.

Below is the full statement read by Mr Gyamfi at the press conference:

Bawumia announced a 30% and 50% discount on the benchmark values of imported vehicles and general goods respectively.

Sadly, but unsurprisingly, the government has decided to scrap these discounts on 44 categories of imported goods.

2. This terrible decision comes at a time when the national currency is depreciating and world commodity prices are increasing at an alarming rate, with freight charges and port handling charges being extremely high.

More importantly, the callous decision by the government to reverse benchmark value discounts comes at a time Ghanaian businesses, startups, parents and households are reeling under a yoke of excessive taxation, persistent increases in fuel prices and high cost of living never before witnessed in the annals of our country.

4. These increases which will eventually be passed on to Ghanaians will further escalate prices of general goods and services in the country and exacerbate the severe hardships Ghanaians are already reeling under.

5. In fact, the bitter reality is that, given the many draconian taxes that have been introduced by the callous Akufo-Addo/Bawumia/NPP government since April 2019 and the continuous depreciation of the Ghana Cedi which is already eroding profit margins and the capital of businesses, importers and Ghanaians, in general, will be worse off as a result of this decision. In short, import duties will be far higher than they were before April 2019 when the benchmark value discounts were introduced, in view of the continuous free fall of the Cedi and the raft of new crippling tax measures that the government has introduced since April 2019.

6. Ladies and gentlemen, we wish to make the point, that this catastrophic decision has been occasioned by the self-inflicted economic malaise we presently find ourselves in, an economy in tatters and government simply unable to find money to do anything.

After five (5) years of economic mismanagement and reckless election-driven spending, which have taken the country back to its HIPC days, the Akufo-Addo/Bawumia/NPP government has decided to punish the already-burdened Ghanaian people with more hardships for their own recklessness and mismanagement.

This is why all manner of crippling taxes and killer revenue measures such as the reversal of benchmark value discounts are now being imposed on Ghanaians to shore up the government’s revenue just to create an artificial picture of a sound economy in order to convince the investor community on more and more borrowing.

7. We in the NDC are left in no doubt whatsoever that this latest decision by the government to reverse discounts on benchmark values of imported goods, further accentuates Dr Bawumia’s place as the most deceitful Politician in Ghana’s history.

It will be recalled that sometime in the year 2019, Dr Bawumia was all over the place pontificating that Ghana's Ports were one of the most expensive in the sub-region and that government had decided to introduce discounted benchmark values in order to facilitate more trade volumes, make our ports more competitive, reduce smuggling and increase government revenues from the Ports.

8. Friends, the question that ought to be asked is, what has changed in just two years to warrant a reversal of that so-called “brilliant economic policy” which was introduced by the once economic messiah of the NPP who has now turned himself into an IT champion?

What happened to all the justifications Dr Bawumia mounted for the introduction of the discounted benchmark values?

Is government no longer interested in facilitating more trade volumes and making our Ports competitive?

Is government no longer interested in reducing smuggling and increasing national revenue through benchmark value discounts?

9. Furthermore, the reversal of benchmark value discounts on selected imported goods reinforces our long-held view that this Akufo-Addo/Bawumia/NPP government is an insensitive and callous administration which does not have the wellbeing of the Ghanaian people at heart. These are the very people who promised among other things to move this country from taxation to production but have yet again pulled another deception on Ghanaians relative to import duty and Port charges.

Never has a government been this cunning and untruthful to the people in our history as a country.

10 As always, it would come as no surprise to us for the government’s apologists led by Dr Bawumia himself to once again canvass the COVID-19 pandemic as a convenient excuse for the decision to reverse benchmark value discounts.

These days, the inept and clueless AkufoAddo/Bawumia/NPP government blames literally every single thing on COVID-19, including when the sun fails to appear

However, it is important to state forcefully that COVID-19 can never be blamed for the reversal of benchmark values.

The government exceeded its revenue target for the year 2020 (COVID year) and actually raked in more revenue than they did before COVID struck.

1. In addition to this, and by courtesy of the coronavirus pandemic, the government has received the support of about US$2 billion from the IMF, a US$100 million grant from the World Bank, US$250 million from the Stabilization Fund, about GHS20 billion support from the Central Bank, among others, all of which have been squandered on hyper-inflated consumption-related expenditures.

12. Ladies and gentlemen, it is worthy of note that, several countries in the sub-region such as Togo, Benin, Nigeria, Ivory Coast, among others, have better budget deficit, debt to GDP ratio and other economic indices than Ghana despite being hit by the COVID pandemic.

None of these countries has slapped their citizenry with the kind of draconian revenue measures the Ghanaian people are witnessing at the hands of the insensitive Akufo-Addo/Bawumia government.

Therefore, COVID-19 can neither be a reasonable justification for the reversal of benchmark discounts on imported products nor the imposition of unprecedented hardships and misery on Ghanaians by this government.

On the contrary, it is down to crass economic mismanagement spurred by a toxic combination of unbridled borrowing and reckless spending on misplaced priorities that have brought us here.

That is what has created the unprecedented high budget deficit and unsustainable debt hole we presently find ourselves in.

13. Again, we must register our displeasure at the misplaced priorities of this government and the continuous waste of the public purse on the opulent lifestyle of the President and his government of family and friends in this time of economic difficulties.

It is important to emphasise that revenue has never been a problem for the Akufo-Addo/Bawumia/NPP government.

Without any argument, this government has been the luckiest and most resourced government in Ghana’s history, with a total resource envelope of over GHS460 billion accruing to them in the last five years.

14. Yet, the chunk of all these unprecedented revenues is spent on consumption-related expenditures such as the rental of hyper-expensive luxurious jets to satisfy the comfort of President Akufo-Addo, while the rest of the meagre resources of the state are misappropriated through corruption and naked thievery by his appointees and family & friends, as was recently noted by the Catholic Bishops Conference.

For instance, the 2020 Auditor General report shows that Ghana lost over GHS32 billion as a result of corruption and financial irregularities in the public sector from 2017-20202.

President Akufo-Addo continues to display such insensitivity in this time of economic difficulties and the same continues to be emulated by his appointees.

15. Friends from the media, the claim by the government that the purpose of the reversal of benchmark value discounts is to address concerns raised by the Association of Ghana Industries (AGI) and promote local production, is mischievous and ridiculous to say the say least.

This is because some of the items listed under the 44 categories of imported goods affected by this draconian policy, such as vehicles, spare parts, Plants, Equipment, machinery, sugar, some drugs (pharmaceuticals) are not manufactured in Ghana, while some of the affected items such as Clinker, cement paper, paper, etc. are input materials for local production.

Even for the few affected products that are produced locally, we do not currently have the local capacity to produce to meet national demand.

Hence, any policy that seeks to increase import duties and ultimately the prices of goods, will lead to more hardships in the country.

The sensible thing for the government to do under the circumstances if they are genuinely minded to support AGI and boost local production is to reduce the cost of doing business and the factors of production by stabilizing the Ghana cedi, reducing the tax burden on businesses and by ensuring that businesses have access to cheaper credit, low utility tariffs and subsidized inputs.

This is the surest and sustainable way of boosting local production without necessarily increasing the level of hardships in the country.

16. In conclusion, we wish to make the point, that Ghanaians have had enough of the deception and callousness of the Akufo-Addo/Bawumia/NPP government.

The NDC holds the view, that this is not the time for more taxes and draconian revenue measures such as the reversal of benchmark value discounts.

We share in the view espoused by GUTA that the GRA withdraws the statement announcing this measure which will only go a long way to stifle the already burdened businesses in the country.

We contend that this is the time for the judicious and efficient use of taxes collected, and the meagre resources of the state for the benefit of the Ghanaian people.

Enough of the wastage and ostentation being displayed by President Akufo-Addo and his government, only to turn around and impose hardship on the Ghanaian people through killer measures such as these.

17. It is about time we came together as a people irrespective of our social backgrounds or political affiliations to resist these draconian measures of the failed Akufo-Addo/Bawumia/NPP government which will only worsen our living conditions should they be allowed to stand.