'It’s impossible; there won't be sky trains in Ghana' – Amewu 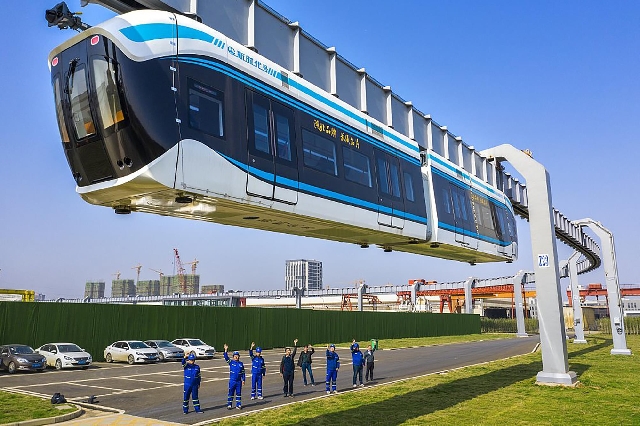 A driverless suspended monorail vehicle being tested on an 800 m elevated track in Wuhan, China

Railways Development Minister John Peter Amewu has said it will not be possible to build any sky trains in Ghana in the near future contrary to earlier promises by the Akufo-Addo government to that effect.

In November 2018, the first Akufo-Addo government signed an agreement with a South African group, Africa Investment (Ai) SkyTrain Consortium, for the construction of the Accra Sky Train Project.

The Railways Development Minister at the time, Mr Joe Ghartey, signed the agreement for Ghana on the sidelines of the Africa Investment Forum in Johannesburg, South Africa.

He emphasised that the Sky Train Project was the solution to the ever-increasing road traffic congestion in Accra, with its detrimental effects on economic activity, pollution and the quality of life.

“There is confidence in the project. The promoters (Ai SkyTrain Consortium) are very serious, and that is why we invited the President, himself, to witness the signing. This should assure the investors that Government is solidly behind it. The economics of this project are also good. We are very excited about the prospects,” Mr Ghartey said at the time.

“Today, we have signed an MoU, which will last nine months, where they (Ai SkyTrain Consortium) can do their feasibility into detail. After which we have given ourselves 45 days to take our concessionary agreements for approval by Cabinet and also by Parliament. By January 2020, we should start the construction of the project,” Mr Ghartey added.

South Africa’s Deputy Minister for Transport at the time, Sindisiwe Lydia Chikunga, who was present at the signing ceremony, stated: We are very excited, and we hope that, in due time, we will witness the construction in 2020. We wish you all the best in the feasibility period.”

Addressing the Ai SkyTrain consortium meeting, President Akufo-Addo stated that after the deterioration of Ghana’s rail infrastructure over the years, it had become a priority of the government “to rehabilitate, revive and expand, and get us a railway infrastructure that is fit for purpose.”

He said the project “is a good example of intra-Africa co-operation. It is Ghana-South Africa co-operation, meeting and coming together to deal with the problem of urbanisation, which is facing all our countries.”

President Akufo-Addo said Accra, with a population of some 250,000 at independence, now had six million people, and the Accra SkyTrain Project, he added, “is a very, very efficient solution to it. I am happy that is the result of the cooperation between our two countries.”

He assured the Consortium of the commitment of the government to “manage the country well, give the country good governance, and provide a strong macro-economy, so that those who bring their money into Ghana are protected in terms of the rules of the game, and are also protected by the level of the economic environment.”

The African Investment SkyTrain Consortium is made up Wilson Bayly Holmes, a construction engineering company in South Africa; BUNENGI Group, a project development company focused on developing projects in infrastructure; and Ai Capital, the investment and financing arm of the Ai Group, one of the most in influential international investment banking advisory groups focused on Africa.

However, Mr Amewu told Accra-based Citi TV on Tuesday, 23 November 2021 that: “The sky train that we are talking about is the one that is going to run on columns in the sky like the ones you see in Dubai but no agreement has been signed.”

Mr Amewu added: “Rail construction takes a lot of time and it is also capital intensive. A kilometre of a railway line is about four to five times the cost of building a concrete infrastructure in terms of building an asphaltic road.”

“So, considering the fiscal space that we have in the country, facilities to absorb it is becoming problematic for the government and you know our current debt to GDP which is in excess of 70%.”