J.J. 'belongs' to us but 'opponent' Akufo-Addo 'hijacking' his funeral – Asiedu Nketia cries; hints at NDC's own funeral 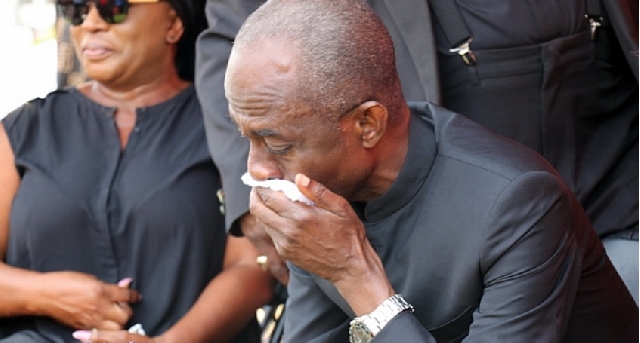 President Nana Akufo-Addo is doing everything to “hijack” the funeral of the late former President Jerry John Rawlings, General Secretary of the main opposition National Democratic Congress (NDC) has said.

Mr Rawlings died on Thursday, 12 November 2020 at the Korle Bu Teaching Hospital while on admission.

After officially announcing the former president's passing to the nation via a statement on Thursday, President Nana Akufo-Addo, on the same day, received a delegation from the family of the late president, who formally informed him of the death at the Jubilee House.

On Friday, 13 November 2020, the President, during a passing out ceremony of some army recruits, used the opportunity to inform the Ghana Armed Forces about the former military leader's death.

Both the president and his vice-president have also suspended all campaign activities after declaring a 7-day national mourning period during which all flags will fly at half-mast in Mr Rawlings’ honour.

The NDC’s presidential candidate, former President John Mahama and his running mate, Prof Naana Jane Opoku-Agyemang, also suspended all their campaign activities and returned to Accra to mourn with the Rawlingses.

The NDC, led by Mr Mahama, held a meeting with a high-powered committee tasked to coordinate the funeral activities of the former President.

Speaking to Accra-based Citi FM on events relating to Mr Rawlings’ passing so far, Mr Asiedu Nketia said: “We were sorely disappointed that the President of the Republic, even in issuing a statement of condolence, refused or failed to recognise the fact that President Rawlings was the founder of the NDC”.

“It is against all the different practices we have been engaged in, in the past, as far as the death of prominent members of the two political parties are concerned,” he said.

“The President has refused to recognise that the man belongs to NDC, and he is the founder of NDC”, he argued, adding: “Everything about this funeral, so far, depicts an attempt by an opponent to hijack the funeral of the founding father of our political party, and we don’t think the funeral of our party founder ought to be organised somewhere, and we get invited.

He said: “We have called on the immediate family to share condolences, and we are beginning to discuss the way forward. We have directed all branches of our party countrywide to organise events countrywide that will give a fitting celebration of the life of our founder… We will participate [in the national funeral] but that will not stop us from organising our own thing.”