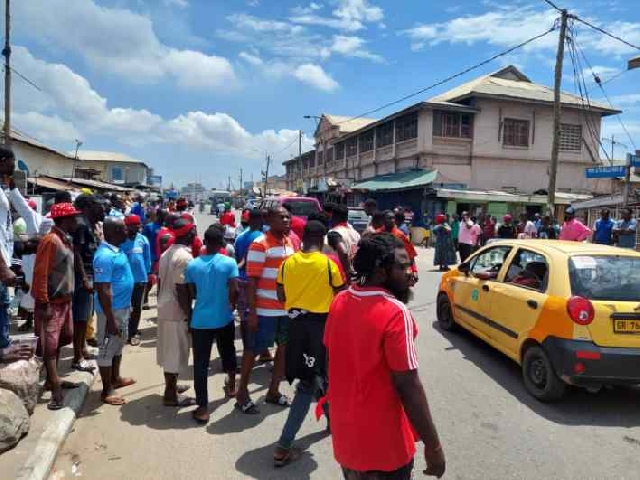 People at the scene of the protests

Four members of a group known as Concerned Youth of Odododiodoo Constituency have been arrested by the police for leading a protest march on Saturday, 18 September 2021 against President Nana Akufo-Addo’s nomination of ex-MP Elizabeth Sackey as the next mayor of Accra.

The former Deputy Greater Accra Regional Minister is among the hundreds of Metropolitan, Municipal and District Chief Executives to be names today, Sunday, 19 September 2021.

The police, in a statement, said the arrests were “for allegedly causing public disorder at Jamestown in Accra.”

“The ringleaders led scores of people to allegedly block a road at Jamestown by burning car tyres, further creating a sense of fear and disorder.”

“The police administration strongly cautions any individual or group of persons who intend to unlawfully assemble and cause mayhem over the publication of the MMDCEs list or any other matter to immediately abandon such plans or face the law.”

Meanwhile, the acting Metropolitan Chief Executive of Accra, Mr Mohammed Adjei Sowah, has condemned the disturbances and dissociated himself from it.

In a statement, he said: “We should recognise the President’s authority to nominate individuals of his choice to promote his agenda, and it’s our duty to support the appointees to succeed”.

“I totally support all the President’s nominations and commit to continue to work toward the development of the country,” he said.