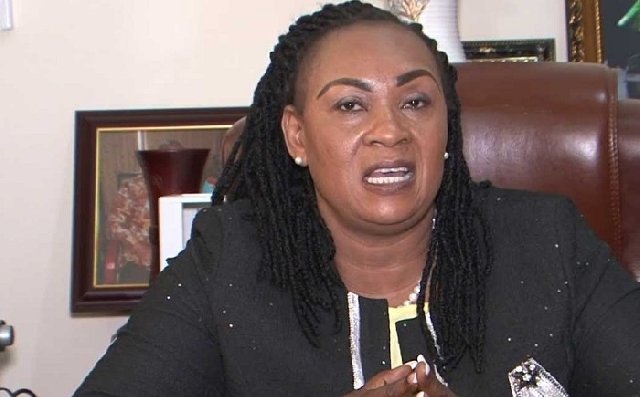 The Network of Journalists for the Promotion of the Rights of Persons with Disabilities in Africa (PROMOAFRICA) has condemned the violent firing of gunshots at a voter registration centre in the Awutu Senya East Constituency of the Central Region by the Minister of Special Development Initiatives Mavis Hawa Koomson.

PROMOAFRICA, in a statement, said: “It’s very disheartening to see persons with disability on a wheelchair, aged persons, pregnant women, or lactating mothers at the polling station in Kasoa during the shooting, running for cover.”

According to the group, the EC’s directives that these people should go to their district offices for the registration exercise does not mean that they “don't visit polling stations to register again because most of the EC offices in the various districts are not disability friendly and so some disabled persons prefer to go their polling stations to register for convenience seek.”

“Unfortunately, security personnel at the polling stations are not even holding truncheons, but Hon. Ministers of State [like] Hawa Koomson and other political actors are brandishing harmful weapons, that well-trained security personnel deemed unnecessary to carry one,” the statement said.

The group further appealed to the national security apparatus and the National Peace Council to step in and “crack the whip without fear or favour,” adding " equality is equity."

Apart from this group, the Christian Council of Ghana has also condemned the shooting incident.

A statement from the Eminent Persons Group of Religious Leaders signed by its Chairman Rt. Rev. Prof. J.O.Y. Mante, who is also the Moderator of the General Assembly of the Presbyterian Church of Ghana, said "Such high-profile incidents should not be countenanced by our state security”, adding: “Acts or threats of coercion, intimidation or physical harm perpetrated to affect the electoral process, all in the context of electoral competition, should have no place in these worrying times with COVID-19 hanging over us.”

The Ghana Pentecostal and Charismatic Council (GPCC) has also called for the resignation of the minister, as, according to GPCC, she is “no longer tenable” to hold office.

The GPCC also wants President Akufo-Addo to dismiss the minister if she fails to resign.

The GPCC’s statement, signed by its President, Rev Prof Paul Frimpong-Manso, said it has followed the incident with great concern and “more worrying is the involvement of the Member of Parliament for the area”.

The GPCC called on “the Ghana Police Service not to relent in their efforts in bringing all perpetrators of the shooting incident, including the Minister to book by ensuring that justice and fair play is manifestly seen to be done in this matter.”

The Council rehashed that: “The Ghana Police Service has the capacity and is capable of dealing with crimes of this nature without fear or favour and we wish to encourage them to rise up to this challenge in dealing with this and the earlier one reported at Banda Ahenkro in the Bono East Region no matter whose ox is gored so as to assure us that we can trust them to deal with all forms of violence ahead of the 2020 general election."

The GPCC is also of the view that the “Minister of state is no longer tenable and she must resign or be fired by the President without prejudice to any criminal actions that may be taken against her by the Police” and called on President Nana Addo Dankwa Akufo-Addo “to take immediate action on this matter to safeguard the peace and security of this nation and to assure all Ghanaians that we can trust him to keep this nation together in unity ahead of the General Elections in December.”

The GPCC also urged “Ghanaians, especially aggrieved individuals and parties at every stage of the electoral process, to resort to the time tested electoral laws and conflict resolution mechanisms and institutions to resolve” their grievances rather than violence.

It reminded citizens that: “It pays to use non-violent means to resolve our differences than the violent approaches, which could deprive us of our liberties, relations and even our lives."

GPCC urged the youth to channel their energies, talents and skills into very productive endeavours and refuse to be used by unpatriotic politicians for their greedy parochial interests saying “today and the future belongs to you so jealously guard it!”

The Council further reminded Ghanaians that “we have only one Ghana to live in with nowhere else to go in the event of any escalated violence, though it is an open secret that the politicians we are willing to die for, have their passports and that of their families ready to fly out of this country should violence erupt”.

“Let’s be prudent and act responsibly to maintain the peace and security of Ghana for the future of our children and generations yet unborn.”

Speaking in his personal capacity rather than for the National Peace Council, which he chairs, Prof Asante described the incident as “very very very worrying”.

“I saw this very late last night before I slept and really, I was disturbed about the whole thing”, he told Benjamin Akakpo in an interview on Class91.3FM’s Executive Breakfast Show on Tuesday, 21 July 2020.

“Why? For the simple reason that we have an honourable minister, an honourable member of parliament also, and I believe that she’s also the NPP’s parliamentary candidate for Awutu Senya East Constituency. We would expect that such honourable people would provide leadership, no matter the provocation”, he explained.

“And, for her to have said that she felt threatened, so, she pulled a gun and fired it and created chaos in that place; what if, in pulling the gun, others, whoever the detractors may be, even if they were around, ... also pulled a gun? What would have happened?” he asked.

Prof Asante wondered if “pulling a gun” was the “only option” the minister and MP had under the circumstances.

“Even if her bodyguard was not around, couldn’t she have gone to the police station to inform the police about what was happening? As far as I’m concerned, it cannot be justified in any sense”, he said.

“She should do the honourable thing, and for me, resign”, Prof Asante demanded.

Apart from that, he said the “police must also investigate the matter and let the law take its course for that matter, especially, the context within which this was done – in a situation where tension is rising and we’re doing all we can, people from different angles are doing all they can to ensure that there would be peace and tranquillity in what we are doing; we will not expect our leaders, honourable people to do things of this nature”.

“If I’m an honourable person and I’ve done a thing of this nature, then I need to sit back and consider what I have to do. As for her being a minister, can she still maintain that dignity of an office? This is the thing”.

Beyond asking for her resignation and the police taking her on, Prof Asante said Parliament must also sanction the MP for her “dishonourable” action.

“Parliament must also have a say on such matters. Parliament cannot sit down and think that parliamentarians can do whatever they like and there will be no sanctions whatsoever. I would think that parliament, the executives, the speakers and all the leadership of parliament, will have something to say to this person because she brings the name of parliament into disrepute by her action. I mean, so, in any panicky situation, you pull a gun and shoot it? If an ordinary citizen does that, what is going to happen?