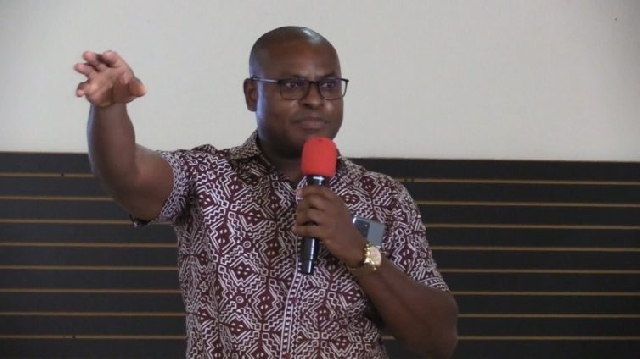 Richard Ahiagbah
The Director of Communications for the governing New Patriotic Party (NPP), Richard Ahiagbah, has raised concerns about how the main opposition National Democratic Congress (NDC) Minority Members of Parliament reduced the Ken Ofori Atta’s testimony at the censure motion hearing to mere politicking.   According to him, the NDC Minority had zero evidence and it took the evidence contained in the finance minister’s 34-page document to dismantle the NDC’s grand agenda to misinform Ghanaians about the state of Ghana’s economy under the management of the minister.   The governing party’s communicator took to his Twitter handle on social media to raise these concerns about the posture of the NDC Minority when the finance minister appeared before the eight-man ad-hoc committee hearing the motion of censure against the finance minister on Friday, November 18, 2022.   "Sadly, it’s becoming a pattern of the NDC to reduce everything about governance to politics in the country," he worriedly said in the tweet.   He juxtaposed the happenings at the ad-hoc committee to the proceedings at the Supreme Court during the hearing of the 2020 Election Petition brought by former president John Dramani Mahama against President Nana Addo Dankwa Akufo-Addo.   "The NDC’s petition challenging the eligibility of the president as not validly elected was also hollow just as what is happening in parliament with the ad-hoc committee co-chaired by Dominic Ayine, MP for Bolegatanga East Constituency in the Upper East Region, and KT Hammond, MP for Adansi -Asokwa Constituency in the Central Region," he narrated.   The finance minister last Friday during his testimony at the ad-hoc committee hearing apologised for the suffering he has caused Ghanaians.   The president’s cousin told the committee probing seven allegations against him, in connection with which a motion of censure has been filed against him by the minority caucus; that he has always meant well for the people of Ghana ever since he became finance minister.   “Since the Akufo-Addo government came into office in 2017, everything we have sought to do was aimed at making the lives of the people better," he testified on Friday, 18 November 2022, adding: “We have been focused on this vision to improve lives and in the first four years, our efforts were leading to a realisation of the vision."    However, he said: “Today, I acknowledge our economy is facing difficulties and the people of Ghana are enduring hardships."