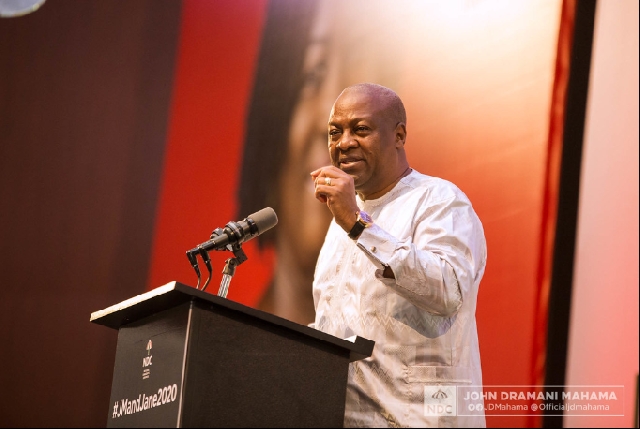 The Majority in Parliament has asked the National Peace Council and the Christian Council, to condemn former President John Mahama for stoking ethnocentric sentiments in the ongoing voter registration exercise.

In an interview with the parliamentary press corps on Thursday, 6 August 2020, the Vice-Chair of the Interior and Defence Committee, Mr Collins Owusu Amankwah, said the allegation made by Mr Mahama and the National Democratic Congress that the government is using the military to sideline Ewes and non-Akans from the registration exercise, is “parochial” and self-serving.

In a recent statement on Saturday, 1 August 2020, Mr Mahama said: “This is not the Ghana our forebears toiled for and built!”

“Each and every successive President”, he noted, “left a peaceful, stable and united country”.

However, he observed, “The road President Akufo-Addo is taking our beautiful country through, using the military and party thugs to stop people from exercising their right to register and vote in the upcoming December elections, is dangerous and unacceptable”.

He alleged: ‘There have been many reports and video evidence, like the one in this post, of the President’s deployment and discriminatory use of soldiers to target our brothers and sisters in the Volta Region and wherever there are settlements of Voltarians and non-Akans”.

The flag bearer of the National Democratic Congress (NDC) said: “Executive power must not be used to foment ethnic discrimination and abuse as is happening under Nana Akufo-Addo”.

“These calculated acts of ‘dehumanisation, disenfranchising Ghanaians and stripping them of their citizenship’ must end”, he insisted.

He promised: “They will surely never happen under a new NDC administration because we will foster a spirit of peace and unity in our nation”.

As Commander-in-Chief, Mr Mahama pledged, “I will not use our military in such a partisan manner to terrorise our own people, and in matters that are purely civil and dwell in the very heart of our constitutional democracy”.

Mr Amankwah, however, said: “It saddens my heart, the way and manner the National Democratic Congress (NDC) is conducting itself getting to the general elections. It appears there’s a grand scheme to rebrand and tag our noble security agencies as being political and partisan. And I think it is more dangerous and suicidal to our democracy as people”.

“And, therefore, I want to seize this opportunity to call on the National Peace Council, the Christian Council of Ghana, to, as a matter of necessity and urgency, call His Excellency the former President of the Republic, John Dramani Mahama to order that his ethnocentric comments, which seek to undermine the very pillars of our democracy must be brought to a stop”, he said.

In his view, “It is very very unfortunate that a whole political party will indulge in playing of the tribal card, which seeks to undermine and also create division within the rank and file of the people of this country”.

“It’s not right and I think the time is now that institutions like the Nati0onal Peace Council must intervene, must call the leadership of the NDC to order that Ghanaians are not interested in tribal politics, we’re one people with a clear sense of direction, we are one people with a common destiny. Where from these tribal comments? Why is it that a while political party is trying to incite one group against the other? Whose interest does it serve? Is it Ghanaians or their parochial interest?

“And, I think we must all condemn it. It’s very unfortunate that it’s being spearheaded by a whole former head of state. I don’t think it’s right and the time is now to condemn what appears to be a whole grand scheme to wage a lifeless war against the security agencies of the country”.

Mr Owusu Amankwah also said the soldiers were deployed to ensure that aliens do not infiltrate Ghana with COVID-19, “so, it will be wicked on his [Mahama] part to draw the government and also the ruling party into this propaganda and also hate-for-vote campaign that he is embarking on”.