My 'father' Mahama left me "very little inheritance, so, bear with me" – Akufo-Addo 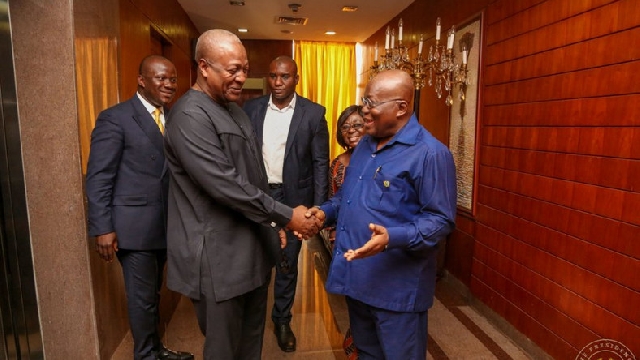 President Nana Akufo-Addo has said he inherited a poor kitty from his predecessor John Mahama and has, thus, urged workers of the Ghana Railway Company Limited in Tema to have patience with him as he tries to fix things.

During the last day of his three-day tour of the Greater Accra Region, Mr Akufo-Addo told workers of GRCL on Wednesday, 4 December 2019 that even though his administration is willing to support them in all ways, “unfortunately, I did not have a rich father, so, I didn’t get a big inheritance”.

“When I came, there was very little in the coffers, I’m trying to build it up now, so, you have to bear with me”, the President told the workers.

President Nana Akufo-Addo has said his government is revamping the “deteriorated” railway sector by building a first-class network in Ghana.

Mr Akufo-Addo told the GRCL workers at the Diesel Multiple Unit (DMU) workshop that even though a lot has gone wrong in post-independent Ghana, neglecting the rail sector to rot away was the worst thing to do.

"The British left us a functioning railway system, we didn't look after it, and we allowed it to deteriorate. For this part of the 21st century, a major responsibility is on you, on me, my successors, to rebuild the railway infrastructure in our country", President Akufo-Addo stated.

"It is obvious that rail transport is environmentally-friendly, it is efficient, it is less costly and it is generally a more intelligent way of moving people and goods than any other form of transport. Other people have got first-class railway systems in the world, Ghana, we are going to have a first-class railway system in our country", President Akufo-Addo promised.

The Minister of Railways Development, Mr Joe Ghartey, in his remarks, noted that by 2023, Ghana must have a viable railway sector that will meet the transportation needs of the citizenry.

He further indicated that 10 defective coaches have been rehabilitated at the workshop where the gathering was held by workers of GRCL.

"In 2016, over 100 coaches were sold as scrap. In 2017, we decided that we would review the policy of selling coaches as scrap and we will see whether it is possible to refurbish some of the coaches. A brand-new coach, Mr President, costs about $500,000. The cost of refurbishing is about $50, 000. Out of the 27 coaches that were left after over hundred were sold as scrap, we have repaired 10", Mr Ghartey noted.

President Akufo-Addo commended the staff of GRCL for their efforts at refurbishing the country's old coaches, saying: "I am very impressed to hear that the old policy of selling coaches as scrap has been, itself, scrapped and that this new policy of repairing our coach stock has already produced such positive results".