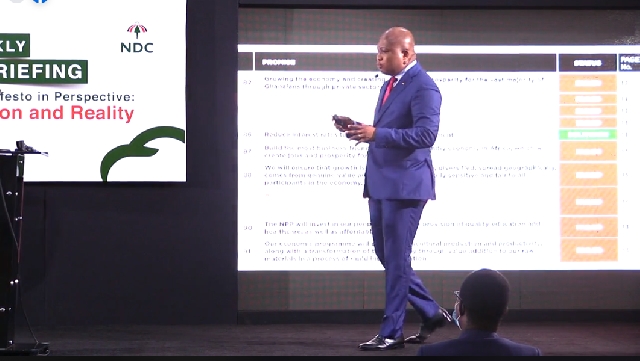 The Akufo-Addo government’s performance so far is 14 per cent and not 78 per cent as claimed by Vice -President Dr Mahamudu Bawumia a few months ago, the biggest opposition party, the National Democratic Congress (NDC) has said.

Cumulatively, he said the government has only achieved 86 (14 per cent) of its 681 promises with five months to the 7 December 2020 general elections, thus, scoring an F, which he even described as “generous”.

According to Mr Ablakwa, President Akufo-Addo’s government’s claim that its total number of promises was 388 of which it has achieved 78 per cent so far, is false, adding that “no wonder the hashtag #KickNanaOut has been trending on social media.”

"You are given four good years of the destiny of the people and all you can do is 14 per cent. And even this we have been so generous. You scored an F", Mr Ablakwa observed, adding: "You don’t even have the courage to apologise for it and try to see if you make amends but you think you can lie your way through by understating the number of promises that you made.”

On 11 February 2020, Vice-President Dr Mahamudu Bawumia declared that the Akufo-Addo government had achieved 78 per cent of its manifesto promises when he addressed participants at a Government Townhall Meeting and Results Fair in Kumasi, Ashanti Region.

Taking the audience through the challenges the nation faced when the Akufo-Addo administration took office, including declining economic growth, high inflation rate, high interest rates, high fiscal deficit, a weak and collapsing financial system, high unemployment, a health insurance scheme on the verge of collapse, four years of dumsor with its costs, and many parents unable to afford school fees for their children, Dr Bawumia said the NPP government had faced the challenges head-on and had delivered 78% of its manifesto promises.

“Notwithstanding the difficult economy we inherited, we had to get on with it and start to fix the problems. We were cognisant of our many promises. In fact, at the direction of President Akufo-Addo, we put together a dashboard of manifesto promises immediately after we were declared winners of the 2016 election, and before we were sworn into office. We have been using this dashboard to track our manifesto promises since”, the Vice-President said at the time.

“The challenge was huge. How could an economy that could not pay even teacher and nursing training allowances, suddenly deliver lower taxes, restore teacher and nursing training allowances, create jobs, implement free senior high school education, NABCo, Planting for Food and Jobs, One Village-One Dam, One Constituency-One Ambulance, reduce electricity prices, formalise the economy, industrialising the economy, reducing the cost of doing business, etc., while at the same time reducing the budget deficit and the rate of borrowing? It seemed an impossible task and our opponents were emphatic that we could not fulfill our promises. But we were very confident that with good economic management and by the grace of God, we could make what seemed impossible possible.

“The data and the evidence are clear that we have largely met our manifesto promises. We have delivered and are delivering on over 300 of our promises, and we are on course to do even more,” he declared.