Napo asks: 'Is this the dumsor you've known and lived with?' 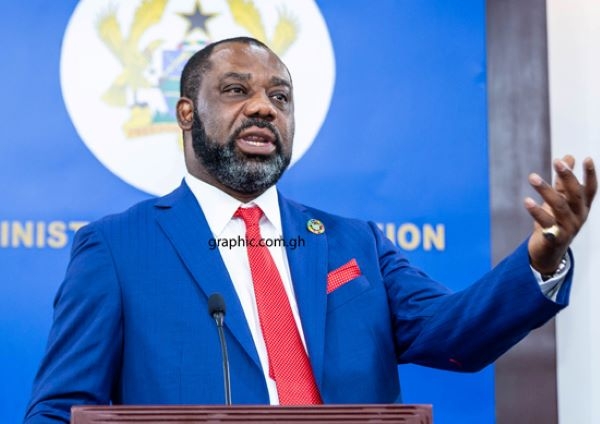 Energy Minister Mathew Opoku Prempeh has said the intermittent power outages Ghanaians are currently witnessing are a result of ongoing system challenges and, thus, cannot be likened to the four-year power outages experienced under former President John Mahama from 2012 to 2016 due to production and financial problems, which necessitated a load-shedding timetable for the whole country.

Taking journalists on a tour of one of the ongoing system upgrades in Accra on Monday, 6 April 2021, Dr Opoku Prempeh said the current pockets of outages have nothing to do with a lack of funds or fuel.

“I think the issue of financial challenges doesn’t even come in here because they are doing the project, we can all see it, so, where does finance come in? The people don’t have money to buy lunch, or?” he wondered.

“I don’t know but as far as we can see, the project is an ongoing project, so, it’s not about finances, it’s just that if you’re renovating your house, sometimes, it’s more complicated and it’s more expensive than even building a new house”, he explained.

According to him, “these our lines that we’ve just been informed were strung, some in 1950, some from 1965, the power they were supposed to transmit, Accra has expanded tremendously, so, they are giving us lines that can improve the power situation in Accra”.

The Energy Minister added: “We just need the forbearance of Ghanaians because what we are planning and what we are implementing is the best for them”.

The 2021 budget, he noted, has making provisions for the ongoing system upgrades.

“In the budget of this year, it is clearly talked about in system improvement all over the country, so, we are going to continue to improve the systems that have been strung since the 50s till we get it done”.

Denying the return of dumsor, Dr Prempeh urged: “We should all be truthful in our communication. In 2016, the whole country, they gave us periods that we were off and on. In 2016, the government of the day told us that it was a generation problem. In 2016, even the opposition talked about the government not having money to buy fuel. This is not a generation problem, this is not about fuel, so, how could it be dumsor?”

“Dumsor is planned and a timetable is rolled out and it affected the whole country for four years. Is that what we are seeing? No”, he asserted, insisting: “Some of the systems, because of the challenges, the reason the system upgrades are being done is what we are feeling”.

“So, we have to bear with the contractors to finish in time so that we can enjoy the improvement we so desire”, he pleaded.

Pressed further by the journalists if he was being categorical that there is no dumsor, Dr Prempeh retorted: “Is there dumsor? I would ask you”.

“Is it the dumsor that you have known and come to live with that is happening in the country?” he wondered.

“We have systems where lines are flickering, voltages are low and, sometimes, like it happened over the weekend, a line is down because a conductor has broken. And that is exactly why we are here today – the system upgrade that is ongoing – and, so, the challenges are what we are dealing with and all I can say is to plead with Ghanaians to be forbearing and we’ll coming out of the problem”, he noted.

Dr Prempeh also dismissed rumours festering on social media that the intermittent outages were deliberate so as to justify intended tariff hikes.

“Some of these claims need not be responded to in the sense that in the light of the obvious fact, this was not started today, this project has been ongoing for some time, the project the engineer just told you about, so, I can simply say it is not true”.