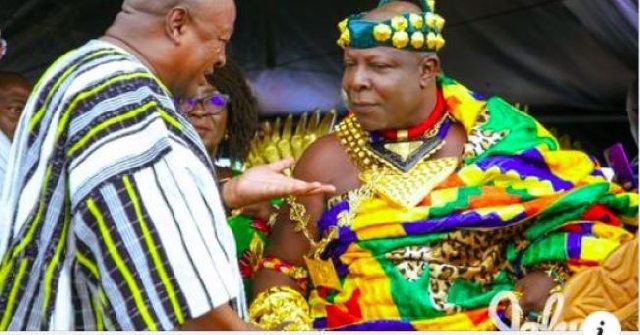 Former President John Dramani Mahama has said Aflao, as the most vibrant border town in Ghana, deserves more than it currently has and, thus, in line with the party’s promises in the 2020 People's Manifesto, the next NDC government will give the people of Aflao a modern international standard market, a new hospital, in addition to other socio-economic infrastructure.

Mr Mahama made the promise when he joined Togbui Amenya Fiti V, Paramount Chief of Aflao, on the occasion of his 25th anniversary over the weekend.

Tobgui’s anniversary coincided with the Godigbe Festival of the chiefs and people of Aflao.

Mr Mahama expressed joy that Togbui visited and personally invited him to grace the occasion.

Aflao being a border town, people from I thank the people of Aflao Togo and Benin thronged the durbar ground to witness the ceremony.

Aflao is a town in Ketu South District in the Volta Region on Ghana's border with Togo.