No complacency; work as if we were in opposition – Oppong Nkrumah to NPP 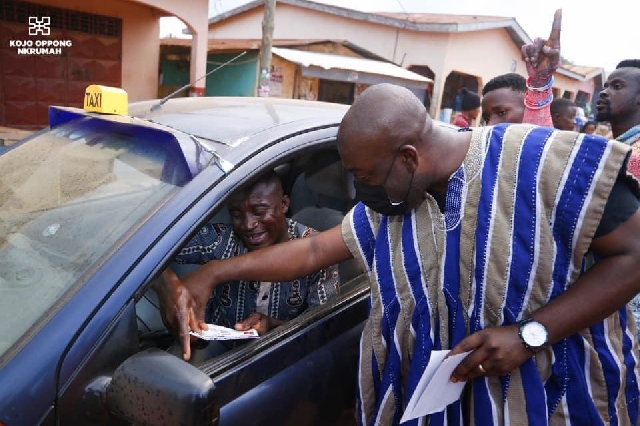 Members of the governing New Patriotic Party (NPP) must not be complacent in the lead-up to the 7 December 2020 polls, Information Minister Kojo Oppong Nkrumah has warned.

While retail-campaigning in Akyem Ayirebi in the Eastern Region, Mr Nkrumah said: ”We have worked hard, but the most important thing now is to avoid complacency and ensure all pro-NPP registered voters cast their ballots correctly on December 7”.

“We need to work hard because our future as a country depends on this election.

“All of us must work as though we were still in opposition.

“We must not stop knocking on doors, visiting shops and lorry stations until we secure a wide margin victory for Nana Addo and his MPs”, the Ofoase Ayirebi MP urged.

“Until we clinch a resounding victory, we can’t sleep. If we sleep, it will slip,” Mr Blay warned on Friday, 20 November 2020, when he met the Greater Accra Regional Executives of the NPP, constituency executives, MMDCEs, government appointees, volunteer groups, the regional campaign team, patrons and some leading members of the NPP in the area, as part of his nationwide tour to jolt the party up for the polls.

“We need a resounding victory to send a strong signal to the entire country that we are not ready to go back to John Mahama’s wilderness and that we are poised for Akufo-Addo’s promised land”, Mr Blay charged the party.

“Thankfully, we have tasted both situations. We came from Mahama wilderness where there was dumsor, where agricultural growth was in the negative, where industrial growth was nothing to write home about, where nursing and teacher training allowances were cancelled, where the unemployment situation was so unbearable that it led to the formation of the unemployed graduates association, where the cost of electricity was more than the cost of rent, where institutional corruption was the order of the day, the likes of SADA, GYEEDA, Woyome illegal payments and so on and so forth.”

“Thankfully, God Almighty in his infinite wisdom decided to bless the country with the decisive, compassionate, incorruptible and God-fearing Nana Addo Dankwa Akufo-Addo and because of his foresight, teacher and nursing training allowances have been restored, our children and grandchildren are enjoying free education. Through planting for food and jobs, Ghana is currently exporting 19 food crops. Our cocoa farmers for the first time in history have over 28 per cent increment in the producer price of cocoa.”

“We have major automobile giants like Sino truck, Toyota, VW, and Nissan all setting up assembly plants in the country. Beyond that, local assembly companies have equally received help from tax incentives to serve as financial assistance,” he said.