Okada riders storm Class91.3FM to meet Mahama; promise to campaign for him 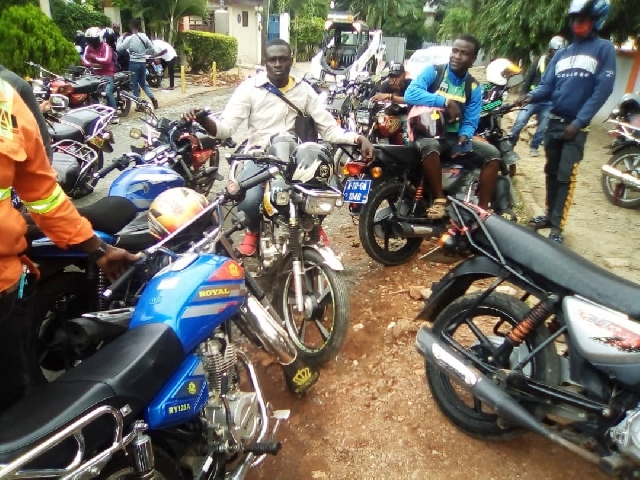 Members of the Okada Riders Association of Ghana say they will form campaign teams in the various constituencies to support the opposition National Democratic Congress’ (NDC) flagbearer, Mr John Dramani Mahama, in his campaign toward the December 7 polls.

This NDC has promised to legalise the operations of Okada riders if voted into power in the upcoming elections.

The Okada Riders Association pledged their support for the NDC flagbearer when they converged on the premises of Class Media Group (CMG) at Labone in Accra, where Mr Mahama was having an exclusive interview on Class91.3FM’s Executive Breakfast Show (EBS) on Monday, 14 September 2020.

“So, very soon, you’ll hear from us in the regions and some of the constituencies to declare our support for you.

“We’re going to do this to ensure that you come back [to power]. Today, we’ll lead you to your office slowly so you’ll see we are not criminals”, he said.

Mr Mahama thanked the Okada riders for their support and further assured them of his commitment toward ensuring that his promise is made manifest.

“It is a business that has come that is sustaining people and, so, whether you like it or not, it is a reality and, so, it is better for us to legalise and regulate it and make it safe so that it can become one of our transport modes. Motorcycles are used for many things”, he said.

“There are people who ride motorcycles to work every day because that’s the means they can afford. There are those who ride it to deliver parcels and deliver food and other items. There are others who use it for commercial purposes."

The NDC flagbearer reiterated that legalisation of the Okada business will make it safer while providing insurance for those passengers who are carried on it.

“I think that it’s a better way to go than the way we have currently,” he said.

He also revealed that in drawing up the NDC’s manifesto, Okada riders were consulted and emphasis was placed on ensuring that they are not harassed on the roads.

“So, if we regulate it properly and we make it safe and give training to the riders so that they know how to respect the roads, I think that will be a better way to go than the current system that we have.

He assured the riders that even if the governing NPP fails to legalise their trade, he will still deliver his promise when he assumes office as president of Ghana.

He said: “I notice that government, since we announced it and came out with our manifesto, the government says it has come out with some stakeholder consultations. It’s a good thing if they continue and they legalise and regulate, that’s exactly what we wanted but if it doesn’t happen, I mean, certainly, I have promised that when I become president, we’ll legalise it and we’ll regulate it and we’ll make it safer.”