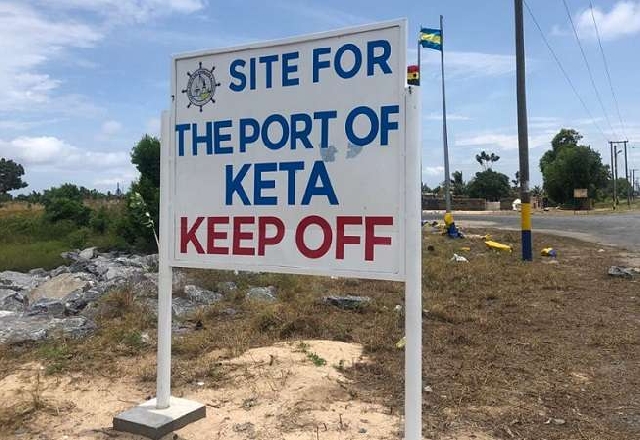 The site for the proposed port

The Deputy Ranking Member of the Roads and Transport Committee of parliament, Mr Governs Kwame Agbodza, has called for the liquidation of the position of Director of the non-existent Keta Sea Port, which he described as a drain on the nation’s scarce resources.

Dr Alexandar Yaw Adusei is currently the Director in Charge of the Keta Port Project.

The MP for Adaklu says he struggles to appreciate the reasoning behind appointing a Director for a non-existent entity and for him to have been drawing salary and emoluments for the past two years.

The Minority MP expressed his frustration on the floor of parliament on Wednesday, 15 December 2021, during the approval of GHS 921,843,000.00 for the services of the Ministry of Transport and its agencies to carry out their programmes and activities for the 2022 fiscal year-ending 31 December 2022.

In November this year, the Minister of Transport, Mr Kwaku Asiamah, said the Keta Sea Port Project is going to be the game-changer for the development of the Volta and Oti Regions, as feasibility studies confirm its economic viability.

A report by the Ghanaian Times said the minister, therefore, appealed to the chiefs and people of the area to lend their full support to the project, as the government moves in to select a strategic partner for its execution.

Mr Asiamah, who was speaking at a stakeholder engagement on the project in Accra at the time, said the processes to the development of the project was far advanced, adding that a strategic partner was expected to be selected soon for the actual execution.

Mr Asiamah said the first phase of the project, also known as the 'Port Nucleus' was estimated at $600 million and would consist of main facilities which would also be the key drivers of the port, which is a commercial one.

The facilities, he said, would include a commercial port gate with access control and administration building, a multipurpose terminal with a berth of 500 metres and a RoRo Dock, an oil terminal consisting of a tank farm and an oil jetty.

The other facilities are a shipyard with a dedicated basin for floating docks and vessel maintenance, fishing port and related amenities, small craft services and access roads.

He said the discussions critical to the commencement of the project had gone far and the procurement processes were expected to be completed by the third quarter of 2022.

He said the government was committed to seeing the project through and would do everything possible to ensure its realisation.

For his part, the project engineer for the Keta Sea Port, Mr Komla Ofori, said the feasibility study so far had proven that the project was both technically and financially viable.

He said the next stage, prior to the actual construction, was the Environmental Impact Assessment (EIA) which would commence soon.

The board chair of the Ghana Ports and Harbours Authority (GPHA), Mr Isaac Osei, said it was good to engage the various stakeholders in the whole process, adding: “We have been given a job to do, and that job is to see to the development of the Port of Keta”.

“We take this mandate seriously because we know how important it is to Ghana and the West African Sub-region, as a whole," he said.