Peter Okocha's discourteous 'are you corrupt?' question caught me off guard – Mahama 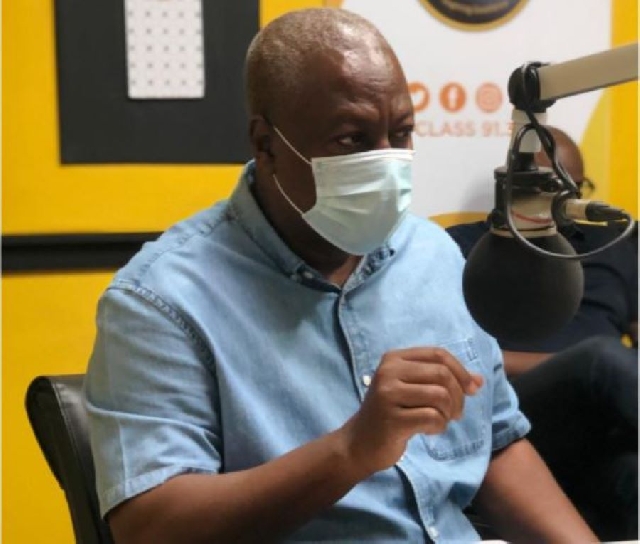 Former President John Mahama has confessed that he was caught off guard by a question posed to him by the BBC’s Peter Okocha a few years ago about whether or not he was a corrupt President.

The flagbearer of the National Democratic Congress (NDC) told Benjamin Akakpo in an exclusive interview on Monday, 14 September 2020 that he found that question “discourteous”, too.

Responding to the trolling he endured on social media following his answer to that question in the lead-up to the 2016 general elections, Mr Mahama told show host Benjamin Akakpo that: “You know, the thing about that interview was; that question was a very discourteous interview”.

“The Western media has created an impression, of course, from some solid experiences – I mean the period of Mobutu Sese Seko and all them that characterises every African leader as corrupt – and, so, one won’t ask a Western leader that kind of question, because it’s discourteous”.

“I mean; if I was speaking to Tony Blair or you were interviewing Tony Blair, I’m not going to ask him: ‘Are you corrupt?’ But it’s that perception that African leaders are corrupt that made him ask that question and, so, of course, he threw me off the cuff”.

“It was a question about: ‘Have you taken a bribe before?’ And it caught me off guard”.

Mr Mahama noted: “I tried to clarify the question, but he kept persisting and I said: ‘No, I haven’t, but, of course, our people took advantage of it and made quite a lot of noise about it.”

According to him, the fight against corruption must be a continuous thing for governments during and after their regime.

According to Mr Mahama, governments must not wait to leave office before the process of prosecution of corrupt officials begins.

He said: “The thing about corruption is that we must, one, improve awareness. Two, we must make the institutions work and insulate political leaders from a certain discretion in terms of how things are done and that is the only way we can fight corruption. Unfortunately, over the years, because of poor funding of the anti-corruption institutions, two, because of political interference in their work, they’re not able to work as well as they should,” he noted.

Mr Mahama further revealed that during his tenure of office, “I said to the anti-corruption institutions: 'You don’t need my fiat to prosecute or investigate anybody and, so, if you come across any case of corruption, just go ahead with investigation and prosecute it'. And it did.

“It landed one of my Members of Parliament in prison. As I speak today, he’s in prison.

“Dzifa resigned over the bus branding issue, the Smartys issue.

“National Service, we dismissed 110 officers because of the ghost names saga and we put 31 of them before court and, so, it’s not about post-regime fight against corruption.

“Corruption can take place as long as you’re in government and then when you leave government you have to face the fearing fire of accountability.

“The fight against corruption must be an everyday thing”, Mr Mahama emphasised, adding: “It must continue whether you’re in government or not and, so, that’s why I keep telling the President: ‘prosecute people who have been corrupt in your government’. You don’t have to wait until a new government comes and then they begin to haul all of them before court.”

Refuting assertions that the NDC, under his administration, has only one example of persons it prosecuted for corruption, Mr Mahama stressed that his government did more than just that.