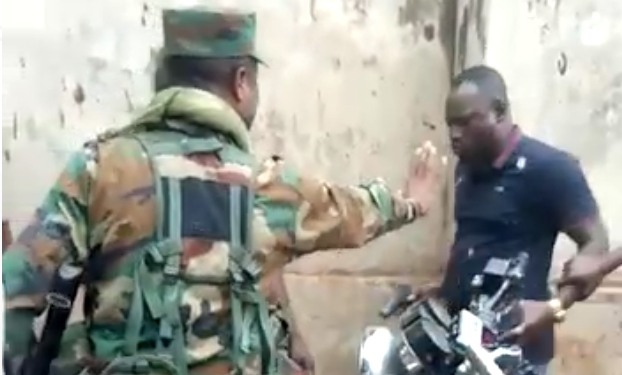 A soldier trying to restrain the armed civilian

The police command in the Ashanti Region is investigating an incident in which a civilian brandished a pistol at a voter registration centre during an altercation between him and a police officer.

A video of the incident has been widely circulated on social media.

Armed soldiers at the centre intervened to calms nerves.

The uniformed personnel in the video reported the matter to their respective commands on Monday, 27 July 2020.

This is not the first time a gun has been pulled at a voter registration centre by a civilian.

The most recent and infamous incident involved the Minister of Special Development Initiatives, Mavis Hawa Koomson, who is also the Member of Parliament for Awutu Senya East (Kasoa) Constituency in the Central Region.

She admitted to firing warning shots at a registration centre in self-defence.

According to the minister, she felt her life was under threat from members of the opposition National Democratic Congress (NDC) and the party’s parliamentary candidate there.

The police have questioned the minister and also took possession of her gun.

The matter is still being investigated.

Following the incident, the Chairman of the National Peace Council called for her resignation but the governing New Patriotic Party issued a statement defending Hawa Koomson’s action.

Also, some local churches in Kasoa have defended the minister’s action.