Shai-Osudoku: I've not abandoned my continuous demand for better roads – MP to constituents 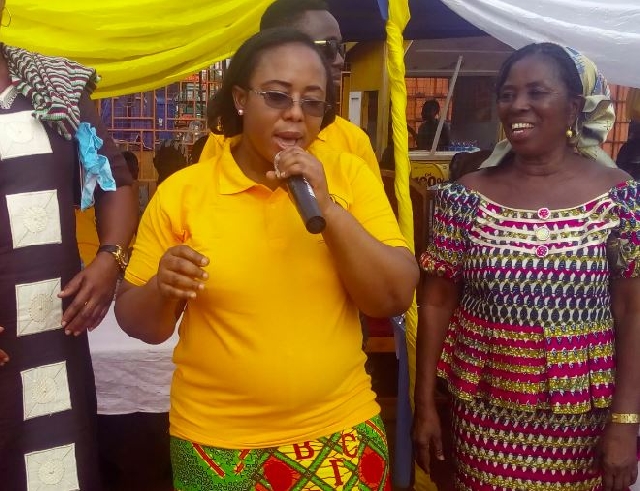 The Member of Parliament for Shai-Osudoku Linda A. Ocloo has assured her constituents that she has not abandoned her continuous demand for better roads in the constituency.

Her assurance comes after her constituents on Monday, 26 September 2022, demonstrated to register their displeasure over deplorable state of road networks from Akuse Junction to Akuse township, Asutsuary to Osuwem and Volivo.

According to them, the deplorable road networks is negatively affecting local economy and driving business downwards.

Reacting to the action by her constituents, the MP in a statement expressed satisfaction.

“I am confident it will go a long way to reaffirm our engagements and pressure on government to fix our roads,” she stated.

She, however, assured that “there is an upcoming project to reshape our roads. If all things worked well, we would see the machines on our roads soon.”

Read details of her statement below:

STATEMENT BY LINDA A. OCLOO (HON) ON THE STATE OF ROADS IN THE SHAI-OSUDOKU CONSTITUENCY

I have taken copious notice of your concerns, debates, worries and suggestions on the bad state of roads in the Shai-Osudoku Constituency.

As your humble servant, I have keenly reserved my efforts in order to have a face-to-face interface with you.

Nonetheless, yesterday's demonstration has pressed a fresh momentum to our demands and have gingered the atmosphere for a response. While, I prepare my engagements, please accept the following as the stark efforts to get our road problems resolved:

1. The John Mahama administration initiated the Volivo Bridge project. Same was taken over by this government, but till now nothing whatsoever has happened apart from the consultancy tasks that were undertaken long ago.

2. In view of this, there is this difficulty to actually commence any hard effort of completely constructing the road. The Volivo Bridge was supposed to provide artillery services for the construction of adjoining roads.

3. We have, thus decided to mobilize resources of stakeholders within the enclave to reshape the Volivo-Aveyime Road. We spoke with Fujian (Tilapia Farm at Asutsuare) for assistance and they obliged to provide machinery, labour etc.

4. We subsequently discovered a gravel pit at Yokpe-Yokornya. We engaged the families and they settled on GHs 100.00 per trip of gravel. The assessment team re-engaged them for a reduction and this was refuted. Thus, the cost of GHs 100.00 did not meet the project budget at the time and Fujian pulled of the engagement.

5. As MP, I tried to mobilize resources to undertake same but the erratic flow of financial resources within the economy coupled with other pressing demands derailed my effort to this day. I was expecting the families of Yorkpe-Yokornya to have made some sacrifices in the face of the public good and further reduce the initial charge. But that proved futile.

1. This road has already been awarded. The initial contract was repackaged and awarded to a new contractor. The contractor commenced work but had paused for the season to settle.

2. Osuwem has been allocated about 5- kilometres of road improvement. And this was sourced by the Hon DCE. They together with Ghana Highway Authority has already undertaken the assessments.

1. There was a high-powered engagement for this road. Golden Exotics had planned to reshape the road.

2. But the Ghana Highway Authority opposed the decision. They asserted that the construction of roads is solely their responsibility and thus Golden cannot usurp that role even if they seek to provide total funding.

3. They suggested that, the entire project cost be allocated to the GHA and same used to undertake road construction.

4. This proposal did not settle well with Golden Exotics and the idea or engagement became redundant.

5. Now, few months ago, when I engaged the DCE, he mentioned a fresh engagement with GHA on the road. The GHA Team had made some assessments and would return with their final verdict.

I am glad with yesterday's demonstration. I am confident it will go a long way to reaffirm our engagements and pressure on government to fix our roads.

I shared, herewith, some videos of the series of questions on Parliament on the state of our roads.

Constituents can assess the Parliamentary Hansards and make inferences for themselves. I have already provided the above as our collective efforts.

Again, it is plausible to state that, I haven't abandoned my continuous demand for better roads. There is an upcoming project to reshape our roads. If all things worked well, we would see the machines on our roads soon.

Ayekoo to the organizers of the demonstration and all constituents who sacrificed their time to participate and will soon engage the communities.