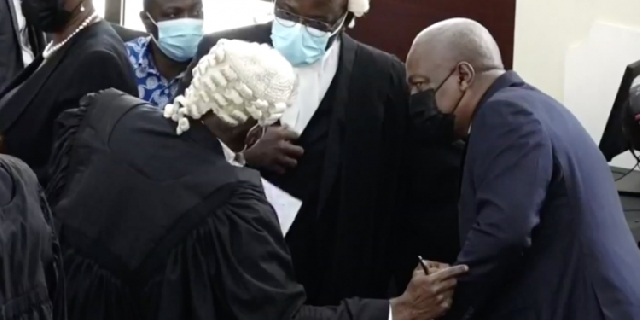 Mahama with his lawyers

The Supreme Court has on Thursday, 14 January 2021 granted the 2020 flagbearer of the National Democratic Congress (NDC), John Mahama, his request to amend some errors in his petition challenging the outcome of the 2020 Presidential election.

In his petition, Mr Mahama had interchanged the Electoral Commission and President Akufo-Addo in one of the reliefs being sought.

He wants a re-run of the Presidential election between himself and President Akufo-Addo.

The court in granting the motion for amendment said correcting the errors did not affect the substance of the case.

Mr. Mahama has up to 4 pm, today, January 14, 2021, to file his amended application at the court while the plaintiffs have been given up to tomorrow, January 15, 2021, to file their amended response.

Earlier the court also gave green light for the election petition to be telecast live on national television just as was done in 2012.

The case has been adjourned to Tuesday, January 19, 2021, for pre-trial to commence.

Mr. Mahama and the NDC have rejected the 2020 presidential election result describing it as flawed.

They have, thus, refused to recognise Nana Akufo-Addo as President although he has been officially sworn in.

Mr Mahama is arguing that neither he nor President Akufo-Addo attained a clear majority because of the omission of the Techiman South constituency from the provisional declaration of results by the EC.

The EC, however, said President Akufo-Addo garnered 51.59 percent of the votes while Mr. Mahama got 47.37 percent.

Mr Mahama is asking the Supreme Court to order a re-run of the presidential election for him and Nana Akufo-Addo.