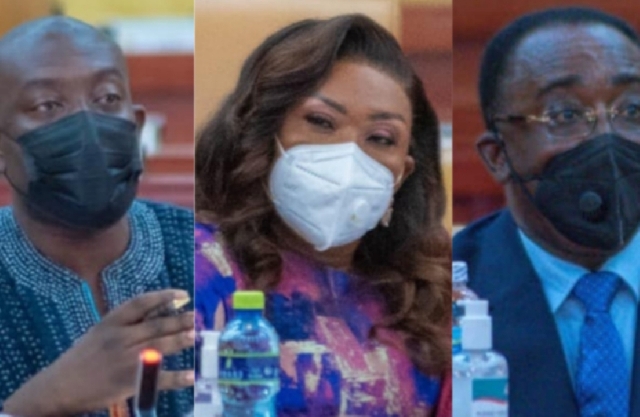 The Minority MPs on the Appointments Committee have given their reasons for rejecting three of President Akufo-Addo’s 30 ministerial nominees.

In a document, the Minority MPs have also suspended the approval of five other appointees pending further investigation.

Read below the reasons for the Minority’s decision:

a) The Minister-designate for Fisheries and Aquaculture Development could not provide convincing grounds for the shooting incident during the Voter Registration Exercise in Kasoa on 20th July 2020 even though we acknowledge her belated apology for her recklessly dangerous conduct.

b) Furthermore, claims of an ongoing investigation by the Police did not come across as credible considering that there has been no update from the police more than 8 months after the unfortunate incident. Our checks also point to the fact that she has not provided any statement to the police as of yet.

c) The nominee confirmed the identity of close associates who have unleashed a reign of terror on helpless political opponents in the pursuit of their narrow political ends.

d) The Minister-designate displayed an alarmingly abysmal lack of knowledge on the sector she was nominated for, making her unfit for the portfolio and therefore untenable to secure the approval of members of the NDC caucus.

a) The Minister-designate for Food and Agriculture was untruthful under oath to the Committee on the circumstances leading to the abrogation of the Fruit and Export Terminal Contract of 2015 by GPHA on his express instructions as contained in a letter dated 11th January 2021.

b) He was untruthful under oath about his directive ordering GPHA to issue a license to Fruit Terminal Company Ltd and how his actions could lead to a US$50million judgement debt.

c) The nominee was grossly insincere with the Appointments Committee on his special relationship with the Director of AMG Company Limited, Mr Ernest Appiah and the latter’s control of fertilizer contracts awarded by the Ministry.

d) The Minister-designate was particularly discourteous, downright condescending and offensively arrogant in his appearance at the committee which is not the kind of attitude expected of public servants.

a) The Minister-designate for Information was not the least candid with the committee on the multiple infractions of the law leading to the Bank of Ghana’s revocation of the license of Oval Microfinance – a company in which he was 83% majority shareholder.

b) He failed to admit ethical liability for the related party lending between Oval Microfinance and West Brownstone which also belongs to him. He also denied outstanding obligations to Oval Microfinance despite the BoG’s examination report establishing the contrary.

c) He peddled untruths under oath about the circumstances leading to investigative journalist Manasseh Azure relocating to South Africa with the assistance of the Media Foundation for West Africa when the journalist faced threats to his life.

d) The nominee was quite evasive on his association with MX24 TV which is owned and managed by his wife with other family members such as Kwabena Oppong Nkrumah serving as shareholder/Trustee for the parent company of MX24 TV known as Black Volta Publications Limited incorporated recently on the 4th of April, 2017 when the nominee was serving as Deputy Minister for Information.

a) The Minister-designate for Health is required to provide further and better particulars on the mysterious Frontiers Healthcare Services Limited US$150 airport antigen test.

b) The nominee is required to clarify the procurement process, particularly as he had told the committee that the Presidential Task Force and the Ghana Health Service were the procurement entities – a claim which is later turning out to be false.

c) We demand to know the real persons associated with Frontiers and the specific persons government related to.

d) We need satisfactory answers on how the US$150 cost was arrived at.

e) We seek further clarification on how the US$150 was shared amongst the parties to the contract and how much has been made so far.

f) We shall be demanding answers on the tax obligations of Frontiers.

g) We are concerned about the flagrant breach of our laws and the dangerous disregard for compliance standards in the execution of the contract. We insist on knowing those responsible for these violations.

h) Another issue of concern is the nominee’s apparent false claims under oath on the status of work at the La General Hospital. We intend to pursue further clarification on the matter.

a) The Minister-designate for Communications is required to provide further clarification on the criteria used for the closure of radio stations across the country.

b) The nominee is expected to respond to empirical concerns on the apparent discrimination against certain category of radio stations during the audit and closures of the stations.

c) We demand concrete evidence from the nominee on her claims that the Kelni GVG contract has resulted in monthly savings of US$1.1million.

d) The appointee must respond to lingering concerns about the seeming lack of sincerity in her apology to NDC MPs when she accused the group of taken leave of their senses in 2020.

a) The Minister-designate for Railways is expected to clarify a number of issues relating to the PDS contract. Of particular interest is how much revenue was collected by PDS and the outstanding claims by PDS on the government.

b) The nominee is also required to provide further clarification on his role and proximity during the 27th December 2020 assault of Mr Emmanuel Aziaka, a bailiff from the Ho High Court by alleged thugs associated to the former Energy Minister.

a) The Minister-designate for Roads and Highways was unconvincing on opaque on the matter relating to the US$570million Accra-Tema road expansion project.

b) We note that the same project was valued at US$480million in an earlier PPP arrangement.

c) He must clarify his role in signing the contract with Mota-Engil Engenharia & Construcao Africa without cabinet and parliamentary approvals.

d) There are also concerns about the criteria he relied upon to pay debts owed contractors which seems to offend Article 296 of the 1992 Constitution of Ghana.

a) The Minister-designate for Attorney-General and Justice appears to have blatantly misled the committee on the true facts about the bail secured by the lawyers of Gregory Afoko. He is required to provide the much-needed clarification on this all-important human right issue. We will in that regard want to ascertain if he did not peddle an untruth under oath.

b) The nominee failed to provide satisfactory answers on his role as a member of the governing board of the Public Procurement Authority during the scandal involving the disgraced former PPA Chief Executive Officer, Adjenim Boateng Adjei. He would be requested to come clean, particularly based on what is now known to our side of the committee. His evasiveness and lack of candour on this matter have left much to be desired.

c) It is our estimation that the former Deputy Attorney General was not sufficiently candid and forthright when he created the impression in response to a question about possible abuse of discretionary authority over post-election commentary by Hon. Inusah Fuseini and Hon. Kennedy Agyapong that he had no mandate to assist his boss at the time, as they both had no mandate after January 6, when he knew the said statements were made in December 2020 at which time he was at post and cloaked with authority. A further probe into this matter is, therefore, being requested by the NDC caucus on the Appointments Committee.