Vote for me; I’ll ensure ‘a prosperous Ghana’, ‘opportunities for all’ – Mahama to security personnel 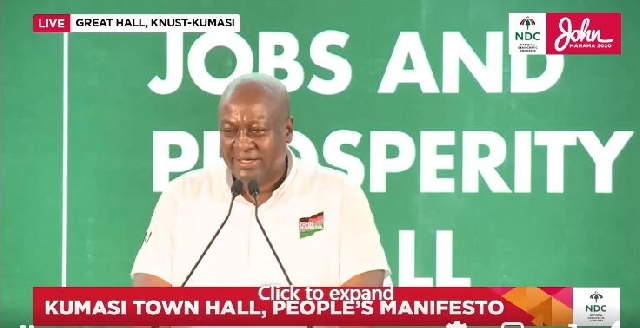 The presidential candidate of the main opposition National Democratic Congress (NDC), Mr John Mahama, has assured personnel of the security services in Ghana to vote for him, as they prepare to partake in the special voting exercise tomorrow, Tuesday, 1 December 2020.

The former president, while commending the security agencies for their contribution to nation-building, urged them to give him the nod in the 2020 general elections to implement the NDC’s People’s Manifesto.

Mr Mahama, in his message to the personnel of the security services on the eve of the special voting, indicated that a vote for him translates into the quest for “a prosperous Ghana that shares opportunities for all”.

Citing some campaign promises that cente on the welfare and operations of security service personnel, Mr Mahama noted that the next NDC government will honour its vow to “the men and women in uniform on whose toil and sweat our nation’s stability, safety, and security depends”.

A MESSAGE TO PERSONNEL OF THE SECURITY SERVICES OF GHANA FROM JOHN DRAMANI MAHAMA, PRESIDENTIAL CANDIDATE OF THE NATIONAL DEMOCRATIC CONGRESS

Greetings to the gallant personnel of our security services

As you prepare to participate in the Special Voting Exercise ahead of the Presidential and Parliamentary elections scheduled for December 7, 2020, I urge you not to continue to despair.

I encourage you to hope and vote John Mahama, for a prosperous Ghana that shares opportunities for all. As your former Commander-in-Chief, I will continue to respect and cherish your patriotic contributions to our dear nation.

You all know the current sad state of affairs in our beloved country. The living conditions of Ghanaians continue to worsen. Economic hardship is the order of the day. Yet, this government has turned out to be the most corrupt in the history of our 4th Republic.

Ghana is now ruled by a small cabal of family and friends who have no respect for laid down procedures. As a result, the Akufo-Addo government has sacrificed time-tested conventions, rules and regulations in the security services and all sectors of our nation.

Discipline has been compromised and morale weakened in the Services. Promotions are no longer based on merit. To make matters worse, a culture of silence hangs over the security services due to the infiltration of partisan elements. Such is the level of impunity of the President’s private militia that they can assault officers and non-commissioned officers and get away with it.

I make a commitment to the security services that – come January 7, 2021 God willing – under my administration, we will not only ensure depoliticisation of the security services but also restore both discipline and transparency to raise morale. This is my solemn pledge to create opportunities for you, not just a few.

Let me take the opportunity to highlight some of the commitments the National Democratic Congress (NDC) made in the 2020 People’s Manifesto to the men and women in uniform on whose toil and sweat our nation’s stability, safety, and security depends.

Specifically, my major pledges and commitments to our security services include:

§ Fair treatment, rapid promotions, national unity, and a mutual sense of belonging within the security services.

§ Ensure upward and equitable adjustments in the salaries and allowances of the Security Services and their civilian employees.

§ Take steps to end the era of promotion and career progression based on politics, ethnicity and nepotism; and institute promotions based on merit and professional standards to boost the morale of our men and women in uniform.

§ In the particular case of the police, review the policy on promotions and use a yearly promotion plan to grant amnesty to personnel who have privately acquired additional qualifications from recognized tertiary institutions.

§ Provide additional housing units and improve the quality and availability of accommodation for all ranks.

§ A firm assurance that personnel of the Ghana Immigration Service, Ghana Prisons, Ghana National Fire Service, Ghana Police, and the Bureau of National Investigations now National Intelligence Bureau will continue to be under the CAP 30 Pension Scheme. The scheme will be improved to provide them adequate retirement income and other benefits.

§ Empower the Prison Service, Fire Service and the Immigration Service with a Self-Accounting Status, so that Parliament can allocate their budgets to them just like the Armed Forces and the Police.

§ Regularise the status of the 37 Military Hospital as a National Emergency Hospital. § Upgrade existing Security Services health facilities like the Medical Reception Stations (MRS) into full-fledged Garrison Hospitals to serve the Security and Intelligence Services and their families in each garrison.

§ Establish an Armed Forces University to give the opportunity to Junior Ranks of the Armed Forces and other Security Services to access higher education and pursue other professional opportunities.

§ Establish a special scholarship scheme for security services to enable personnel who want to pursue higher learning especially for master’s and PhD Degrees to do so without financial constraints.

§ Completely reorganize our approach to UN Peacekeeping Operations and position our Security services to have greater participation in International Peace Support Operations. The NDC will increase the number of operations.

§ Review the disbursement of the amount paid by the UN to Ghana per peacekeeper and ensure that an acceptable percentage of the amount is paid to troops as allowance.

§ The NDC is committed to increasing the peacekeeping allowances paid to individual peacekeepers.

§ End illegal and clandestine recruitment into the security services by actively promoting fairness and equal opportunity principles to restore the integrity and high earned reputation of our security services.

I urge YOU to vote for change in the governance of our country. We cannot afford four more years of corruption, indiscipline, arrogance of power not to talk about the harsh living conditions.

The citizens of our dear country have high hopes in you, and we all look up to you to be firm and resolute in maintaining and enforcing law and order during and after the elections.

It is only you who have the sole responsibility to ensure that the dark clouds of anxiety and uncertainties foisted on our nation through the use of party ‘vigilante’ militia as witnessed in the Ayawaso West Wuogon by-elections is not permitted to happen again.

I have absolute confidence in your ability to demonstrate loyalty to the State and maintain law and order without fear or favour.

I urge the few who may be tempted to do the bidding of the powers that be to soberly reflect and choose to work in the larger national interest.

I urge you to join the crusade to rescue the nation and restore a sense of national calm and unity.

I urge you all to vote massively for me, John Dramani Mahama and the NDC.

A vote for the NDC is a vote for fair treatment, rapid promotions, national unity, and a mutual sense of belonging within the security services, and across the nation.

I pledge to be a Commander-in-Chief for ALL when voted as President of the Republic of Ghana.