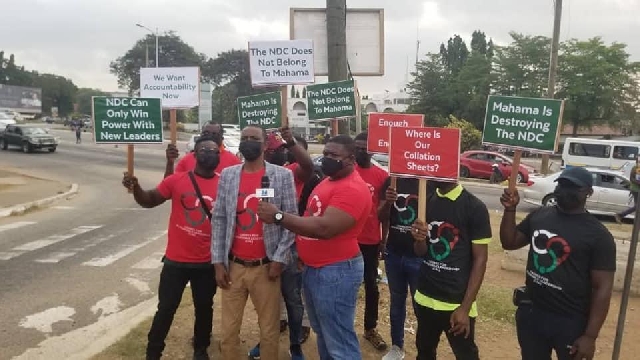 Some members of the Cadres For Accountable Leadership

The members of a group calling itself Cadres For Accountable Leadership (CAL) have regrouped after the expiration of their 14-day ultimatum to the National Democratic Congress (NDC) and its 2020 presidential candidate, Mr John Mahama, and insisting that they be furnished with the party's collated results and pink sheets.

The group stormed some principal streets of the national capital, Accra, today, Thursday, 8 April 2021, with placards to rehash their demands.

Its Convener, Mr Livingstone Pay-Charlie, told Class News: “At our press conference two weeks ago, we gave the party headquarters 14 days to respond to our demands that we wanted to have the pink sheets that were organised by the NDC polling agents or if the party has any collated figures”.

“We were demanding this because we hold ourselves as part and parcel of the NDC. We form the larger rank and file”, he said, adding, “and our demands are premised on the ideals of the NDC”.

“One of the ideals is accountability, as espoused by the founder of the party, the late Jerry John Rawlings”.

Mr Pay-Charlie noted that the group’s demand for accountability after the 2020 elections is aimed at preparing for the 2024 elections.

“So, we are invoking this to know from the party headquarters, what they have done because it is becoming a trend that for 2016 and 2020 elections, the party has not collated its results and must stop those occurrences and be prepared for 2024,” he indicated.

He further stated that a failure of the leadership of the NDC to meet their demands will spark “mass demonstrations across the country and picketing the party offices”.