Who should replace you to get threats if you’re resigning over same? Buaben Asamoa asks Amidu 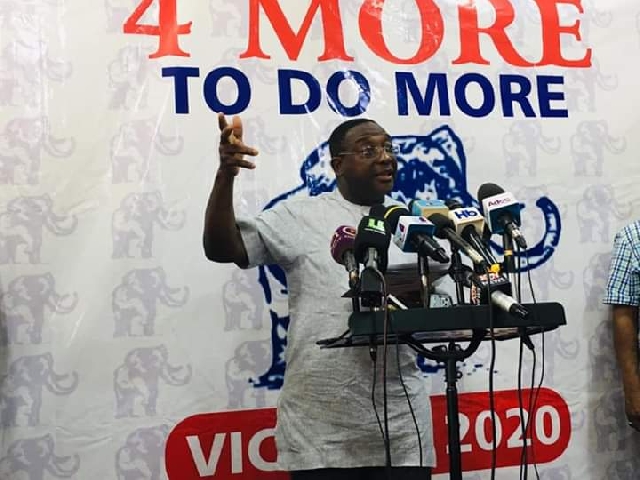 The Communication Director of the governing New Patriotic Party (NPP), Mr Yaw Buaben Asamoa, has wondered why Mr Martin Amidu has resigned from office as the Special Prosecutor over alleged threats on his life.

“Why has Martin Amidu resigned?  I am unable to answer that question. Why has he resigned? Tell me”, he said on Accra100.5FM’s Ghana Yensom on Tuesday, 17 November 2020.

According to the Adentan MP, “we all get threats, so, if Mr Amidu is resigning because of allegations of threats, then who does he want to come and do that job to get threatened?”

“Everything around his resignation is political”, Mr Buaben Asamoa noted.

Reacting to Mr Amidu’s claim that President Nana Akufo-Addo was interfering with his mandate in connection with his probe into the controversial Agyapa Royalties deal, Mr Buaben Asamoa said: “Nobody has taken his mandate from him”, adding: “The Office of the Special Prosecutor is not above the law”.

In his view, the law of natural justice demands that those implicated of committing infractions in connection with the deal, needed to be given the opportunity to explain themselves, which, to him, is exactly what the President sought Mr Amidu to do by infusing the comments of Finance Minister Ken Ofori-Atta into the OSP’s final report.

Below is Mr Amidu’s full statement on his resignation:

I should not ordinarily be announcing my resignation to the public myself but the traumatic experience I went through from 20th October 2020 to 2nd November 2020 when I conveyed in a thirteen (13) page letter the conclusions and observations on the analysis of the risk of corruption and anti-corruption assessment on the Report On Agyapa Royalties Limited Transactions and Other Matters Related Thereto to the President as Chairman of the National Security Council cautions against not bringing my resignation as the Special Prosecutor with immediate to the notice of the Ghanaian public and the world.

It is essential for me to state for the purpose of the records, and contrary to public perceptions, that my appointment letter was received on 5th February 2020 (almost two (2)-years after my appointment). The copy addressees made no efforts to honour any of the conditions of appointment in terms of emoluments and benefits of the appointment ever since my warrant of appointment was issued on 23rd February 2018 to the date of my letter of resignation. I accepted the offer on 10th January 2018 to be nominated to be Special Prosecutor because Mr. President, and Ghanaians knew I have been an anti-corruption crusader all my life and not an anti-corruption entrepreneur. This explains why I have never put the emoluments and benefits of the Office as central to my commitment and my passion for the establishment of an independent, effective, efficient and impartial anti-corruption Office of the Special Prosecutor before the end of the first term of Mr. President. This has not been possible for several reasons.

The Deputy Special Prosecutor has also not been paid any emoluments since her appointment, and there is the need to redress that situation for her now that I am out of the way.

The events of 12th November 2020 removed the only protection I had from the threats and plans directed at me for undertaking the Agyapa Royalties Limited Transactions anti-corruption assessment report and dictates that I resign as the Special Prosecutor immediately.

Fear is the enemy of change and I am prepared from the vacuum created on 12th November 2020 to meet the threats of my demise, as the price to pay for serving my country without fear or favour; affection or ill-will. I acted professionally throughout in the discharge of my duties and my conscience is the anchor of my strength to face any consequences. I am grateful to every Ghanaian for both the support and criticisms during my tenure. When the real facts of my tenure become well-known to the public in the future, history may judge me kindly. Ghana First!