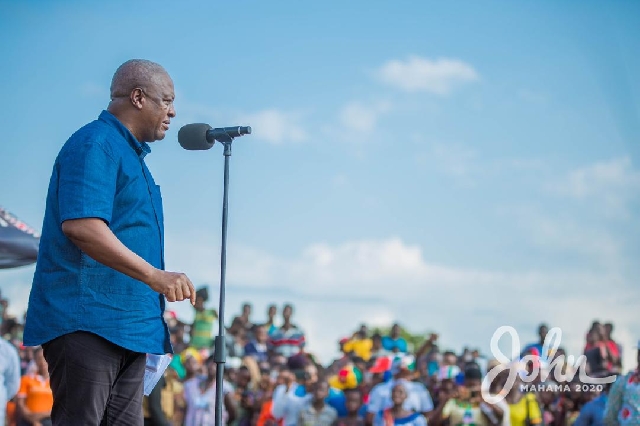 Former President John Mahama has said his next administration, should he win the 7 December 2020 polls, will ensure that anybody or entity that illegally benefitted from the controversial Agyapa Royalties deal, pays back.

“I assure you that if I win the December elections, I will act on the Agyapa report”, Mr Mahama told TV XYZ in an interview on Sunday, 22 November 2020, adding: “The deal is full of corruption and I am going to act on it”.

“All the monies that have gone to people will be retrieved”, the presidential candidate of the main opposition National Democratic Congress (NDC) warned.

He noted: “The government officials will be questioned and be asked to return the money”.

In his recent corruption and anti-corruption risk assessment report on the deal, the now-resigned Special Prosecutor, Mr Martin Amidu, said the Transaction Advisor(s) involved in the deal were susceptible to “nepotism, cronyism and favouritism”.

Additionally, Mr Amidu said in the 64-page report that the deal lacked “probity, accountability and transparency” in some aspects.

“This conduct, which appears to have been in furtherance of the suspected bid-rigging, in the assessment of this Office, severely lowered the risk of corruption, and rendered them a low-risk enterprise in the Agyapa Royalties Transactions process and their approval.

“It is with these new lenses that the analysis of the risk of corruption, and anti-corruption assessments of the legality of the engagement of the other services providers and underwriters on the recommendations of the Transaction Advisors acting as the Ministry of Finance’s procurement entity tender committee contrary to Part VI of the Public Procurement Act, 2003 (Act 663) as amended, and Sections 7 and 25 of the Public Financial Management Act, 2016 (Act 921) afore-quoted were made”, portions of the report said.

It continued: “It was further analysed and assessed that the Transaction Advisor(s) nonetheless, went ahead to identify and recommend services providers and underwriters to the Ministry of Finance for appointment by the Republic of Ghana.

“The Ministry acted contrary to the Public Procurement Authority Act and the Public Financial Management Act in delegating the power to appoint services providers and/or other underwriters to the unlawfully appointed Transaction Advisor(s).

“The Transaction Advisor(s), whose selection and appointment by the Ministry of Finance did not measure up favourably to the analysis of the risk of corruption and anti-corruption assessment that meets the fundamentals of probity, transparency and accountability was/were potentially susceptible to undue influence, favouritism, cronyism, nepotism, and all forms of discrimination abhorred under the 1992 Constitution leading to the suspected packing of the services provider and underwriters position with entities not chosen on merit.”