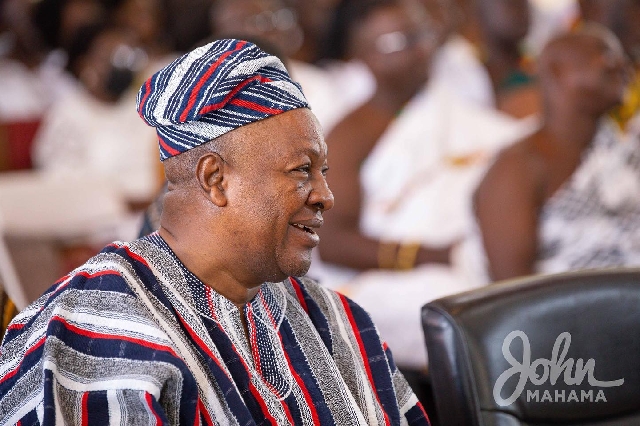 Retired Court of Appeal Judge, Justice Isaac Douse, has said there would be no security of justice and fairness at the Supreme Court if Mr John Mahama, should he become president again, decides to fill the highest court of the land with Justices perceived to have sympathies for his party, the National Democratic Congress (NDC) just as he has accused the current President of having done.

Admonishing former President Mahama against denigrating the Supreme Court any further, after he (Mr Mahama) recently said the apex court’s perceived hostile and politically biased decisions were a national security threat, Justice Duose said: “Time is like a stream: it flows”, adding: “In due course, those who he [Mr Mahama] perceives to be biased will go by attrition of time and they will no longer be there; and, then, at that time, those who are in the stream will be his people and if the same yardstick is being used against them, can we be safe?”

“Because, Ghana is divided right through the middle – if you look at the results of the last election”, the retired judge pointed out on the Class Morning Show on Class91.3FM with host Kofi Oppong Asamoah.

In his view, “there are some people who are worshipping the Supreme Court as it is today and there will be people who will worship his [Mahama’s] Supreme Court, if he manages to also pack the court, as he is alleging the court has been packed in favour of the current government, then we will not have security in terms of justice and fairness and fair play?”

He said even though “it is good to complain”, that “should be about the end of it”.

“I’m praying very hard that he [Mahama] will not take the steps that will also make people perceive his own appointees as such”, the retired Justice added.

In his admonishment of Mr Mahama, Justice Duose said: “The Supreme Court is a very important body, to which all of us will refer from time to time; and, if we drag it in the mud too much, it would affect everybody as well”.

He said the structuring of the Constitution makes it “very difficult, for any new government to reshuffle” the Justice appointed to the Bench, adding: “I’ll caution the ex-president to be very careful about some of these things”.

Justice Duose said Mr Mahama must be “very cautious in his pronouncements because what he perceives now, can also be done to whoever he deems to appoint in due course and, by all means, when he becomes president, he might have to appoint some people to the Supreme Court or to other courts”.

He admitted: “I know that you need to be very courageous and make sure that if the person who appoints you is misbehaving, you can tell him in the face that he has misbehaved, but how many people in Ghana have that kind of courage? It’s very difficult to find people like that”.

A few days ago, Mr Mahama said the image of Ghana’s judiciary is “broken” under the leadership of Justice Anin-Yeboah, and hoped a “new Chief Justice” leads an image-cleansing crusade in the future, since, in his view, the current Chief Justice cannot lead such a process.

Addressing a conference of lawyers of the opposition National Democratic Congress (NDC) on Sunday, 28 August 2022, Mr Mahama bewailed that the judiciary has now become the butt of jokes, as a result of its biased rulings and decisions on cases with a political tinge.