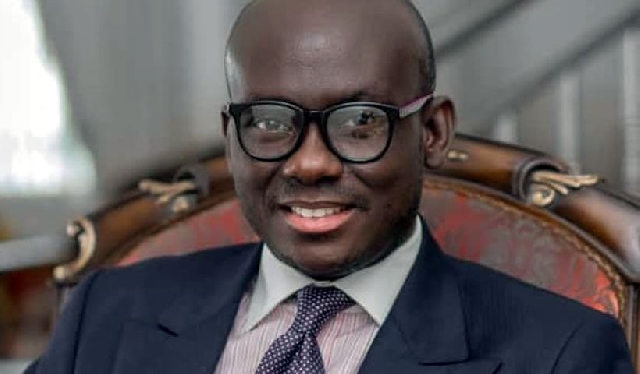 Ex-COCOBOD CEO Stephen Opuni is using all manner of antics to run from judgment day as far as the GHS271-million financial loss trial involving him and businessman Seidu Agongo is concerned, Mr Godfred Dame, Minister of Justice and Attorney General, has observed.

Speaking to journalists on Tuesday, 26 October 2021, after the Supreme Court upheld his review application, through which he prayed the apex court to overturn its own earlier ruling that prohibited Justice Clemence Honyenuga from continuing to hear the matter due to alleged bias against the accused persons on his part, Mr Dame said Dr Opuni’s last application to get one of the judges, Justice Jones Dotse, to recuse himself from the case, had no grounding.

“I thought the earlier application asking Justice Dotse to recuse himself was also one of the gymnastics, as we call it, deployed by Dr Stephen Opuni and clearly, it confirms the point that he is seeking to avoid a judgment day and definitely judgment day will come”, Mr Dame told journalists.

Dr Opuni filed the application a day ahead of Tuesday’s ruling.

In his affidavit dated 25 October 2021 in support of the recusal application, Dr Opuni said his attention had been drawn to a widely circulated internet publication by one Kelvin Taylor, a Ghanaian broadcaster in the United States of America in which he alleged that Mr Dame, on 15 October 2021, went to the office of Justice Jones Dotse, the presiding judge and had an extensive meeting with him.

Dr Opuni said the alleged meeting, according to Kevin Taylor, lasted for more than two hours.

“… I state that the said two-hour meeting which, according to the broadcast of the said Kevin Taylor, took place on the said Friday, the 15th day of October 2021, after the hearing of the oral arguments on Tuesday, the 12th day of October 2021, in respect of the review application, leaves me in serious doubts of the impartiality of his Lordship Justice Jones Dotse in the review application and convinces me that the Attorney General intends to use all means to ensure that I am convicted.”

“… I have been advised by counsel and, verily believe same to be true, that it is a truism and an established principle of law that justice should not only be done but manifestly and undoubted be seen to be done”, he argued in his affidavit.

But Justice Dotse, in response, said Dr Opuni had no grounds to call for his recusal.

He explained that while serving as Acting Chief Justice in the stead of Chief Justice Anin Yeboah who was out of the country from Monday, 11 October 2021 to Monday, 18 October 2021, he met the Attorney General but the meeting was in relation to matters concerning the Ghana School of Law.

In his affidavit in opposition to Dr Opuni’s request, Justice Dotse said: “Indeed, anybody with sound legal knowledge and training will understand that in the course of our work as Judges, it is normal for Judges of my stature and the Attorney General and senior staff of the Office of Attorney General and Ministry of Justice to come into contact on a regular basis”.

“Some of the institutions by which these contacts take place include the Judicial Council and its many Committees, the Rules of Court Committee, the General Legal Council, the Legal Service Board, to mention a few”.

“Apart from issues touching the Ghana School of Law (GSL.), which I discussed with the Attorney General on the 15th of October 2021 and which did not last more than 20 minutes, I believe that the instant application has been actuated by malice and poor judgment”.

“I am in no position to comment on the depositions in paragraphs 7, 8, 9, 10 and 11 of the affidavit in support, and the brazen attempt to connect these events to me are equally in bad taste and completely unwarranted”.

“I also deny the depositions and innuendos contained in paragraphs 12 and 13 of the affidavit in support and state that these are not grounds to require a Judge to recuse himself,” Justice Dotse stated.

Buttressing Justice Dotse’s explanation, Mr Dame said: “I thought that the application for Justice Dotse to recuse himself was totally baseless, without any warrant whatsoever because the Constitution and various statutes of Ghana have placed a constitutional duty upon me”, he noted.

Also, he noted: “By virtue of the Legal Service Act, again a member of the Superior Court of Judicature sits on the Ministry of Justice’s Legal Service Board”.

“So, there are numerous boards and numerous committees that by the Constitution and by statute, the Attorney General is required to sit on it”, he stressed.

“My visit to the office of Justice Dotse during office hours and in my official capacity as the Attorney General and Minister of Justice and in his (Justice Dotse’s capacity) also, as acting Chief Justice at that time, was clearly to discuss matters affecting the Ghana School of Law. Unless they do not want me to resolve the issues with the Ghana School of Law”, he pointed out.