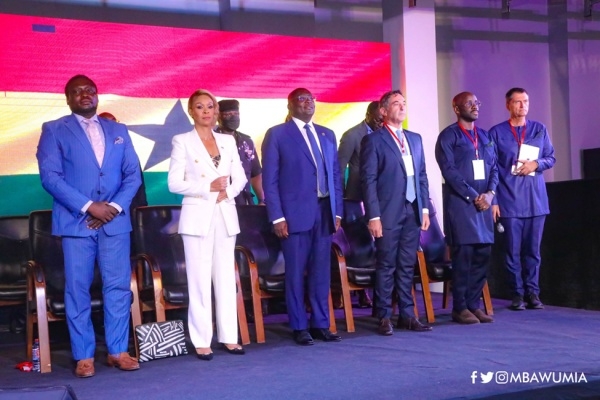 The centre, which is one of the few tier 4 digital centers in Africa, adds to Ghana's existing data center, which will serve, not only the local market, but also the sub region.

Launching the centre, Vice President Bawumia said the certification to establish a tier 4 data centre in Ghana by Onix , is a major milestone in the strategy to create a world class data hub in Ghana to service the local and sub-regional market,

"The accreditation will satisfy the increasingly stringent requirements laid down by regulated entities such as banks, healthcare providers and certain arms of Government which manage sensitive information," Dr. Bawumia said.

The Vice President said the establishment of the ultra modern data centre, is in line with government's vision to make Ghana a digital hub in the sub-region, and the massive investment, Dr. Bawumia noted, will offer businesses more alternatives for sensitive data storage.

"The launch of this data center feeds perfectly into government’s passion and drive to ensure that we have adequate data of the country upon which our digitalization agenda will thrive."

"Data centers such as this 12-megawatt ONIX facility provide the launch pad for a wave of transformation at organization and business process level. Local CEOs can now adopt and implement world-class solutions and be hosted in-country without having to invest in on premise equipment and infrastructure which is costly and is frankly not economically viable.

While pointing out the magnitude of work government has done in its digitization drive, Dr. Bawumia reiterated government's commitment to creating enabling environment for businesses to flourish in the digital space.

"Government can point to several successful and on-going projects within our digitalization agenda, namely the implementation of the property address system, unique identification through the Ghana Card, as well as mobile money interoperability, among others.

"Looking forward, the next frontier lies in digital infrastructure which enables adoption of new business processes. Our role in government is to design enabling policies for businesses such as yours to invest and deliver sustainable results.

The tier 4 data storage, is the most complex data storage system, which has the most redundant components and only a few countries in Africa have it.

It is built to be completely fault tolerant and has redundancy for every component.