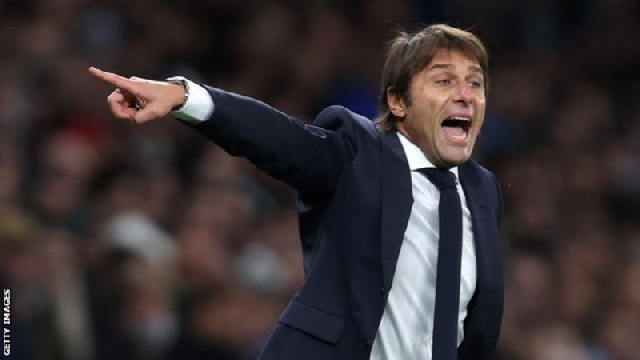 Antonio Conte was put through the full crash course in Tottenham Hotspur as he endured a chaotic introduction to life at his new club.

The Italian, with his feet barely under the table since succeeding sacked Nuno Espirito Santo, was given a hero's reception before, during and after the 3-2 win against Vitesse in the Europa Conference League.

Tottenham's vast new arena witnessed an array of Italian flags reading 'Benvenuto Conte' and one bearing the words 'The Godfather' decorated with face of Conte. The clouds that gathered under Nuno had rolled away quickly.

The man Spurs chairman Daniel Levy is banking on to rescue him after the botched appointment and hasty departure of Nuno made a low-key entrance pitchside with a polite wave - but was soon in the sort of animated action that is likely to forge the firm connection Conte enjoyed with Chelsea's fans while winning the Premier League and FA Cup in two seasons at Stamford Bridge.

What played out on the pitch would have carried greater significance than pleasantries in Conte's mind. And if he had been carrying a notebook it would have been full after 45 minutes of this wildly fluctuating and highly eventful game.

Spurs showed all their faces to the new manager as they veered from the sublime to the vulnerable, often in the space of seconds.

If it is best that Conte learns the lay of the land quickly so he can get his teeth into his task, then this was the perfect start. For good and bad, he was put through the full Spurs experience. This was not a brush with the task Conte faces, it was a full-blown embrace.

Five goals. Three red cards. Spurs 3-0 up inside 30 minutes only to be pulled back to 3-2 before half time. Spurs hanging on as they lost defender Cristian Romero to a second yellow card before Vitesse pressed the self-destruct button as captain Danilho and keeper Markus Schubert followed him down the tunnel.

Dull it was not.

If Conte did not know what he had signed up to before, he certainly knows now - but at least he had the comfort of an opening win as he took the acclaim of Spurs fans and the old Chelsea chant of "Antonio…Antonio…Antonio…." rang out at the final whistle.

Son Heung-min underlined what a prime asset he will be in the new Conte era in a thrilling opening burst when he scored one and struck a post. Harry Kane, so poor he even received the rough end of Spurs fans' tongues in Saturday's 3-0 loss to Manchester United that saw off Nuno, also showed renewed energy, setting up Lucas Moura for the second then pressurising Jacob Rasmussen into putting into his own goal.

And then, for want of a better word, it all went a bit 'Spursy'.

The second half was a fraught affair, with Spurs keeper Hugo Lloris preventing the embarrassment of Conte starting his reign by seeing his new charges give away a three-goal lead.

The 52-year-old, by this stage, was fully into it as he bellowed at his players to push up and to fight, his arms whirling and his fists clenching. He made a bold intervention with fewer than 20 minutes left with a triple substitution as he sent on Harry Winks, Tanguy Ndombele and Davinson Sanchez for Son, Moura and Oliver Skipp.

What will have concerned Conte will have been the very visible reduction in energy levels from Spurs as the game progressed and Vitesse pressed. He prides himself on the relentless fitness of his teams and he will know this needs work.

Spurs' unused subs and those who came on late were put through a ferocious lengthy warm down under the watchful eye of the manager's new backroom team in a deserted stadium after the final whistle. You suspect this new intensity will be a feature on the training ground in days to come.

The win made this a satisfactory start but in reality this was a learning experience. Neither victory nor defeat would have been laid at the door of Nuno's successor - and he will have learned plenty.

What is clear from the touchline body language is that Conte's fire remains but he knows, even after this brief experience, that he has much work to do to re-ignite Spurs and put them back among the major Premier League players.

The three points kept them in good shape in the Europa Conference League. Now Conte's most important and hardest work begins - as it will for the Spurs players.