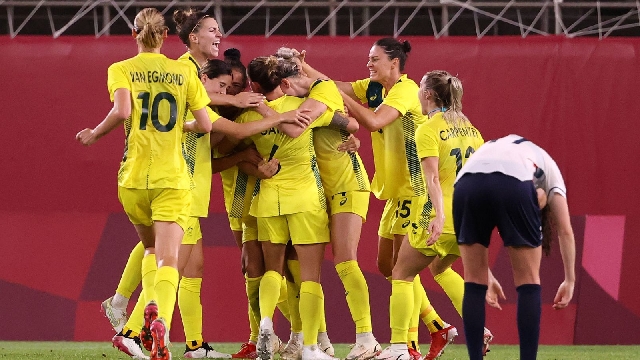 GB Women were agonisingly beaten 4-3 after extra-time by Australia in an epic Olympics quarter-final that had everything on Friday.

Ellen White scored a hat-trick as GB Women were denied victory one minute from the end of normal time, as well as missing an extra-time penalty to make it 3-2, as Sam Kerr's double sent Australia through to their first Olympic semi-final.

GB Women hit the woodwork three times inside 25 minutes through Keira Walsh, Rachel Daly and Lauren Hemp, but Australia took the lead against the run of play through Allana Kennedy's header from a Stephanie Catley corner (35).

But White turned it around for GB in the second half, first directing a superb header into the far corner from Hemp's cross (57), before pouncing on some poor Australia defending to snatch a second (65).

Chelsea's Kerr levelled late on having been afforded too much room in the box (89) to force extra-time, before a chaotic three minutes in which Caroline Weir saw her penalty saved by Micah (101) and sub Mary Fowler go up the other end and score with a deflected effort (103).

Kerr made it 4-2 with a fine header (106) to become the joint-record scorer for the Matildas with 47 goals, and despite White's glancing header for her hat-trick (115), Australia held on for a last-four spot, where they will face either Sweden or Japan in the semi-finals on Monday.