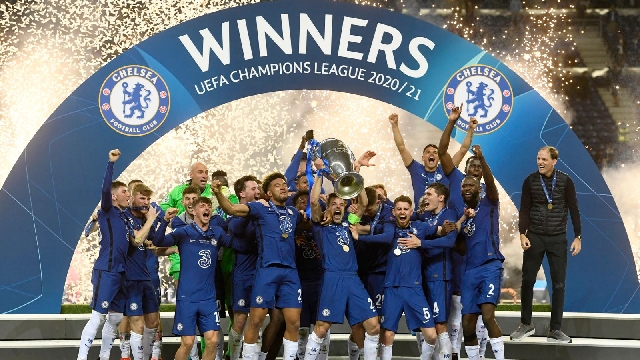 Chelsea have won the Champions League after battling it out in front of thousands of English fans in Porto, Portugal.

The west London club had led at half-time after a 42nd-minute goal from Kai Havertz, and was able to hang on despite City peppering their goal with shots in the dying minutes of the game.

Speaking after the game, Havertz said: "It's an incredible feeling. We deserve this."

The all-English final was due to be played in Istanbul, Turkey, but after Turkey was placed on the travel red list, UEFA moved the game to Portugal's Estadio do Dragao.

The change in venue means fans will not have to submit a COVID test or quarantine upon their arrival back in the UK.

Some 12,000 ticket holders from Chelsea and Manchester City headed to Porto over the weekend and many more had travelled in the hope of getting a ticket, representing the biggest mass departure from the UK since before the pandemic.

Fans in the city told Sky's sports correspondent Martha Kelner that it felt as if COVID had not been around there at all, hailing the "normality" the game brought.

Porto had taken a big risk by offering to host the game, with COVID-19 cases beginning to rise again in the UK, and the emergence of the more transmissible Indian variant.

But the city's mayor, Rui Moreira, said it is a risk worth taking, telling Sky News: "This is the sort of moment that will put the city in limelight.

"I was speaking to a taxi driver this morning and he was saying it finally feels normal again. The cafes are full, the restaurants are full, people are enjoying themselves. We really need to start going again, because even in the last month we have been a little bit too defensive.

"Let's face it, all the elderly people have been vaccinated, all the sick people are now protected. We do need to take some risks and now is the time to start again."