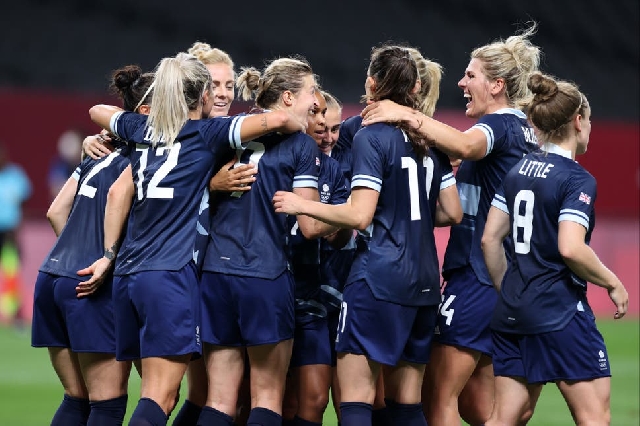 Great Britain started their Olympic campaign successfully as the women's football side beat Chile comfortably in an empty stadium in Sapporo, Japan.

Manchester City striker Ellen White scored either side of the break to put GB in the driving seat in Group E.

City team-mate Lauren Hemp, who was impressive throughout, kept the ball in play at the back post for White to poke in the opener after 18 minutes.

Defender Lucy Bronze then flicked it past the defender and picked out White, whose acrobatic overhead kick made it 2-0 later in the second half.

Hege Riise's side dominated possession and created a host of chances - White could have had a hat-trick had she not been offside when she stabbed in the rebound from Georgia Stanway's strike early on.

The women's football tournament has started two days prior to the opening ceremony in Tokyo, while Team GB's players are the first of a 376-strong team to represent the nation.

They took the knee prior to kick-off to highlight discrimination and racial injustice, a gesture that was reciprocated by the entire Chile team.

White off the mark as Hemp impresses

The Games began amid widespread opposition in Japan, with Covid-19 cases rising and fans absent from the event.

But Team GB got off to the perfect start in Sapporo as the women's football team made their first Olympics appearance since London 2012.

England striker White, part of the team who reached the quarter-finals nine years ago, scored her first two goals at the Games as GB caused Chile problems in attack.

Hemp, 20, was given the nod ahead of Arsenal's Nikita Parris and was a nuisance throughout, driving at the full-back and often dragging across a second defender.

The majority of GB's most promising attacks came from Hemp out wide, while Bronze provided further width on the overlap from right-back.

Scotland's Kim Little dictated play from central midfield - showing how crucial her role will be for the team in Japan - and Chelsea midfielder Sophie Ingle came on as a late substitute to become the first female Wales footballer to represent Team GB at the Olympics.

GB's next game is against hosts Japan on Saturday, 24 July in Sapporo.

'We totally deserved three points' - what they said

Team GB head coach Hege Riise: "The strategy since we started working together has been to keep possession, control the game, play in behind and over the backline - try to keep attacking in their half and control the game.

"In the first 30 minutes, we looked great and then it became a bit slower. We had chances - we totally deserved three points and we kept them away from our goal - that was important.

"We were strong enough to keep them away out of possession, which is good."

Team GB striker Ellen White: "It felt amazing [to score twice]. I feel really proud to be part of Team GB and scoring and contributing to the team felt amazing.

"We had total respect for Chile and what they could bring to the game. We wanted to focus on what we could do. There were moments when we had really great play. There are still things we need to work on but we are really pleased with the three points and we're really looking forward to facing Japan next."

'Little could be key for Team GB' - analysis

The midfield three were great. Little controlled and dictated the game and her ability to scan as the ball is on the move is excellent. She constantly has her head moving and she can beat pressure. The connections in midfield were really good - I really liked the balance of the team.

I think Little could be key in this tournament. She's such an influential player. White is also going to be key in this team. They haven't got many options in that position so she needs to be scoring goals.