January transfer window 2020: Who could be on the move? 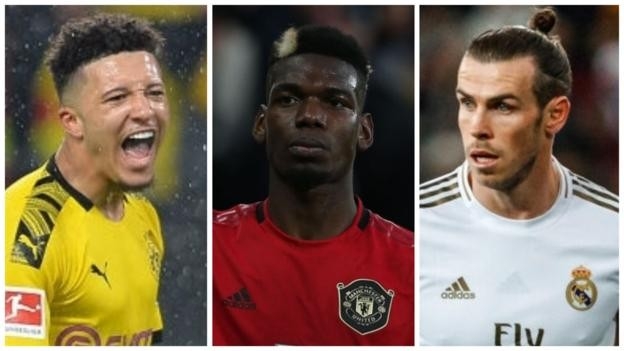 It's that time of the season again.

Clubs will be on the hunt for a bargain or big-money signing, whether they are aiming for the title, looking to clinch a European spot or trying to avoid relegation.

There is one interesting point to consider this season - players who have played for one team in Europe are no longer cup-tied when they move to another club participating in European competition.

So could that mean clubs are more willing to splash the cash?

How player values are worked out

London-based investment company Carteret Analytics advises three Premier League clubs, and another 12 leading sides from around Europe and the rest of the world, on potential new signings.

Its data centres on the 'intrinsic value' of a player - a fee calculated by assessing their performances for the selling club and the projected impact on the buying club, as well as taking into consideration their prime age (usually 26-30).

The company has provided data for some of the names on BBC Sport's list of players who could move in January.

The observant ones among you will have noticed that Pogba was on BBC Sport's list of possible movers last January. The midfielder heads the list once again because the transfer chat will just not go away.

The French World Cup winner's appearances have been limited this season because of an ankle injury but Manchester United manager Ole Gunnar Solskjaer has declared the midfielder "will not be sold".

Questions remain about his Old Trafford future, though.

"Eriksen has fallen out of love with the club."

Eriksen failed to secure a move away from Spurs in the summer and Carteret say his performances have dropped by 38.5% this season, leading to a drop in his value of £32.22m. Tottenham manager Jose Mourinho, asked about Eriksen, has said: "I know his future."

His contract at Spurs ends in the summer and he has shown no inclination to sign a new deal, meaning chairman Daniel Levy may look to recoup some money in January should a decent offer come in.

Another on the list who is a World Cup winner with France.

Giroud has fallen out of favour at Chelsea under Frank Lampard, mainly because of the prolific form of England international Tammy Abraham, while Michy Batshuayi is also ahead of him in the pecking order.

The former Arsenal striker's contract at Stamford Bridge ends in the summer. With almost 80 goals during his Premier League career, he will be an excellent addition for a club lacking a regular scorer.

Uruguay international Torreira impressed in his debut season at Emirates Stadium but has become unsettled in north London this term, fuelling reports of an impending exit.

The combative midfielder joined from Sampdoria and may well head back to Serie A, with his agent saying earlier in the season: "We will see what happens."

Tosun this season - Goals for Everton: 1. Goals for Turkey: 3

That probably tells you all you need to know about Tosun's situation at Goodison Park. The former Besiktas forward failed to claim a regular first-team place under Marco Silva and his fortunes have not improved.

Signed for a hefty £27m in January 2018, Tosun was described by then-Toffees boss Sam Allardyce as "the best in Europe" at that price. Not one he got right.

If this one happens, it will come late in the transfer window.

Ake has turned into one of the league's most reliable defenders since joining Bournemouth in 2017 and has become a regular in the Netherlands team.

The former Chelsea centre-back is currently out with a hamstring injury and the Blues reportedly have a £40m buy-back clause, £12m lower than his Carteret value.

Zaha almost left Selhurst Park in the summer but clubs failed to meet his £80m asking price. That could prove a stumbling block once more as Palace say they have no intention of lowering that figure.

The Ivory Coast international is Palace's best player but could push for a move again if a Champions League club come knocking - and with Chelsea's transfer ban lifted, they could make an offer.

England Under-21 international McNeil, released as a trainee by Manchester United, has built his career at Burnley, for whom he has played nearly every match this season.

The cultured left-footer has impressed on the wing for Sean Dyche's side, providing four goals so far.

The English striker looks to have no future at Newcastle, failing to score in eight appearances this campaign.

Gayle netted 24 times for West Brom in the Championship last season and might have to drop down a division again for regular football.

Brewster hit eight goals to win the golden boot as England claimed the Under-17 World Cup in October 2017.

But with the Liverpool first team firing on all cylinders, the teenager has found opportunities at Anfield hard to come by, making just two Carabao Cup appearances, and it looks as if he will be granted a temporary move away.

Sancho has had his problems at Dortmund this season, having been dropped from the team and fined after returning late from England duty.

But he has still enhanced his reputation on the pitch, becoming the first player in Europe's top five leagues to score and assist 10 goals in all competitions this season. Meanwhile, the German side have just splashed out on teenage striking prodigy Erling Braut Haaland from Red Bull Salzburg so may be prepared to listen to offers.

Could Sancho be tempted by a return to the Premier League, where he did not get a chance first time round at Manchester City? He won't come cheap.

"Wales. Golf. Madrid. In that order."

Bale was already under pressure from the Real fans and he hardly endeared himself as he celebrated with a flag displaying the above message as Wales qualified for Euro 2020.

A move to China broke down in the summer and the former Tottenham and Southampton player has been in and out of the team under Zinedine Zidane. Bale, according to his agent, is "not ecstatic" at the club.

Striker Werner has played a big role in that run, his 18 goals coming at a rate of one every 79 minutes, and the Germany international could leave if the right offer came in.

Uruguay international Cavani has been pushed down the pecking order at Parc des Princes behind new arrival Mauro Icardi, Kylian Mbappe and - when he is fit - Neymar.

Cavani has scored just three goals this season, his contract is up in June and he could be available at a decent price in January.

France international Lemar was the subject of a £60m bid from Liverpool in 2017, but he stayed at Monaco, and Arsenal failed to sign him in January 2018.

He eventually moved to Atletico Madrid that summer for £52.7m but has been unable to hold down a first-team place. In December, he was booed off by his own fans, despite the team beating Osasuna.

Midfielder Zaniolo moved to Roma as part of the deal that took Radja Nainggolan to Inter Milan at the start of the 2018-19 season. It is fair to say Roma got a bargain.

The 20-year-old's form, which saw him voted Serie A's best young player in his debut season, has seen him break into the Italy side.

Muriqi only joined Turkish giants Fenerbahce in the summer but has scored 10 goals for the club and could be on the move again.

The towering Kosovo striker, 25, scored in a Euro 2020 qualifier against England - and a number of Premier League clubs are taking an interest.

Bowen has been one of the most consistent players in the Championship over the past few years, scoring 14 league goals in 2017-18 and 22 last season.

It has been another prolific campaign for the player this time and a step up to the top flight finally looks on the cards.

Montserrat international striker Taylor fired Charlton back into the Championship last season - he was League One's top scorer with 25 goals.

He started the season with five more before suffering a knee injury and, with his contract expiring in the summer, rival clubs are eyeing up a cut-price deal.

Forest, out of the Premier League since 1999, are sniffing around the Championship play-off places as they look to return, with Worrall a mainstay at the back.

But their campaign could be derailed if the defender leaves in January, with leaky Arsenal sending scouts to watch the player this season.

Republic of Ireland international Randolph is one of the most consistent goalkeepers outside the Premier League.

With Boro struggling at the wrong end of the Championship, clubs needing a reliable stopper may move in, with his former club West Ham heavily linked.

With nine goals and six assists this season, Millwall winger Wallace has been linked with top-flight clubs after failing to impress at Wolves.

"His recent stats are unbelievable," manager Gary Rowett has said - and it seems other bosses have also taken note.

The new Jamie Vardy? Here's one from non-league...

If he does get a move, Faal might find himself playing against Liverpool defender Joe Gomez - his second cousin.

The English attacker has fallen out of favour since Neil Lennon's return to the Glasgow club despite three stellar seasons that have yielded multiple trophies and 40 goals in 103 games.

His status as one of the club's highest earners has perhaps contributed to his exile, with English Championship side Preston linked with him in the last window.

The Finn is an interesting one. Signed by Rangers from Dundee for a nominal fee last January after falling out of favour, the midfielder ends 2019 with reports of interest from Juventus and with Euro 2020 to look forward to with his national team.

Manager Steven Gerrard scoffed at reports of an £8m move to Serie A, but Rangers' resolve would be tested with an offer of that nature.

Englishman Cosgrove has scored 41 goals in 58 appearances for Aberdeen to attract interest from his homeland.

Championship strugglers Stoke have been reported to have an interested in the striker, who cost the Scottish Premiership club just £20,000 when they signed him from Carlisle in 2018.