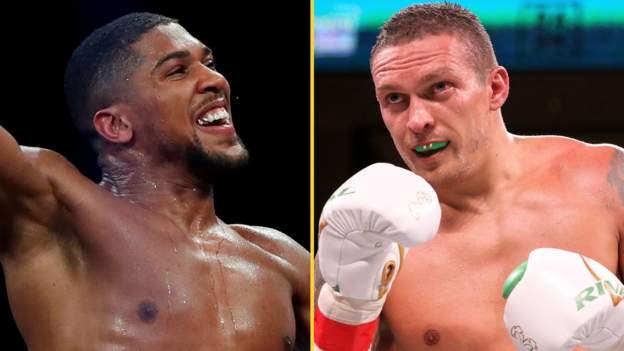 Joshua, 31, will risk his IBF, WBA and WBO belts against the Ukrainian, who is his mandatory challenger.

Usyk, 34, has not fought for a title as a heavyweight but held all four belts a division lower at cruiserweight.

Joshua was ordered to defend his WBO title after the collapse of his bout with fellow Briton Tyson Fury.

"We are two Olympic gold medallists who have fought our way to the top and never avoided challenges," Joshua said.

"The venue is exceptional, the atmosphere will be electric, I'm honoured to be the first person to fight in such an awe-inspiring venue. The stage is set and I am ready to handle business."

Despite months of negotiations a fight between Joshua and WBC world champion Fury for all four belts failed to materialise.

Joshua called Fury "a fraud" after their proposed meeting on 14 August in Saudi Arabia was called off.

Fury will face American Deontay Wilder, who he defeated to become a two-time world heavyweight champion in his most recent bout in February 2020, for a third time in Las Vegas on 9 October.

The Tottenham Hotspur Stadium has a capacity of over 60,000, although vaccination proof may be required to attend sports events of about 20,000 or more capacity by the end of September.