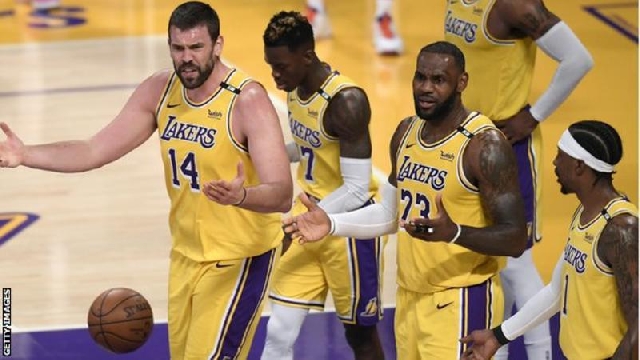 Reigning NBA champions, the Los Angeles Lakers have suffered a shock first round play-offs defeat to the Phoenix Suns.

Devin Booker scored 47 points for the Suns as they sealed a 4-2 series win.

LeBron James scored 29 points for the Lakers, who are the first defending champions to lose at this stage since the San Antonio Spurs in 2015.

The result also marks the first time that James has lost in the first round of the play-offs.

The Suns will now face the Denver Nuggets in the Western Conference semi-finals after they clinched a 4-2 series win over the Portland Trail Blazers.

Nikola Jokic scored 36 points for the Nuggets, whose 126-115 victory condemned Blazers to a fourth first-round defeat in five seasons.

Having won his previous 14 first-round play-off series James found himself attempting to avoid elimination from the first round for only the second time.

The Lakers knocked out the Suns the last time Phoenix reached the play-offs in 2010 but they were on the back foot from the moment Anthony Davis hobbled off with a reoccurrence of a groin injury.

Davis' withdrawal after just over five minutes to the problem that saw him leave game four and kept him out of game five, allowed the Suns to take control at the Staples Centre.

And Booker came to the fore with 22 points in the opening period as the Suns went 36-14 ahead before going on to a comfortable 113-100 victory.

"I've been working my whole life for this moment so it wasn't time to shy away from it," Booker said.

"Plenty of hours of sacrificing a lot of life to this game. So I wanted to put it on full display tonight.

"We knew we weren't going to get to where we wanted to go without going through them, and it happened to be in the first round."