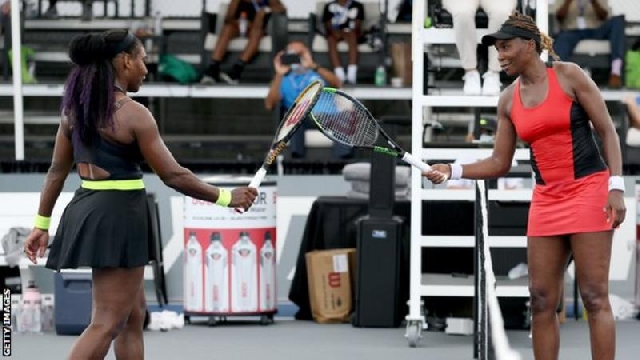 Former world number one Serena Williams came from a set down to beat her sister Venus 3-6 6-3 6-4 and reach the quarter-finals of the Top Seed Open.

Serena also trailed 4-2 in the deciding set but claimed four straight games to win a high-quality match in Kentucky.

It was the 31st competitive singles match between the sisters, with Serena now having won 19 times to Venus' 12.

"I honestly don't know how I was able to pull it out at the end," said 23-time Grand Slam champion Serena.

"I have been losing a lot of those tight sets so I said to myself that I really needed to win, just for my game and my confidence."

Top seed Serena broke seven-time Grand Slam champion Venus, 40, in the first game of the match but faded to lose the first set 6-3 in 41 minutes, before taking the second by the same score in 50 minutes.

Serena, 38, broke first in the final set but Venus fought back and looked to be on course for victory at 4-2 up.

However, Serena, who also had to come from behind against Bernarda Pera in her opening match, hit some crucial winners to reach the last eight of her first tournament in six months.

She will face either fellow American Shelby Rogers or Canadian Leylah Annie Fernandez in the quarter-finals of the behind-closed-doors event.

"I didn't come here to win for the first time in my career, I just came here to get some matches and see what happens," added Serena, who is preparing to play in this year's US Open, which starts on 31 August.

Her chances of winning a 24th Grand Slam singles title in New York have been boosted by several top-20 players withdrawing from the event.

Defending champion Bianca Andreescu, who beat Serena in last year's final, became the latest to pull out of the tournament in New York on Thursday.