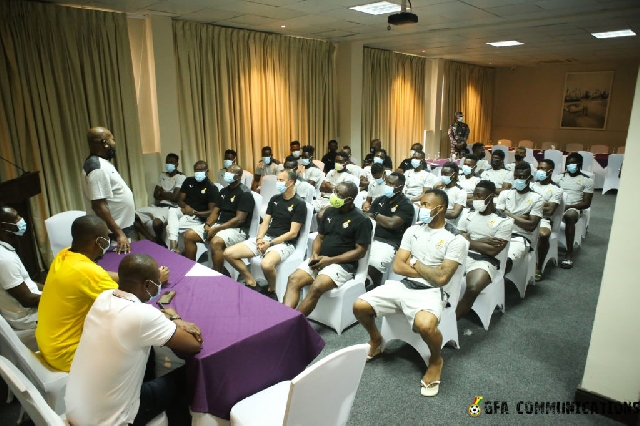 The Minister visited the team at their Cape Coast camp

Minister for Youth and Sports, Mustapha Ussif  has called on the senior national team, Black Stars at their camp in Cape Coast.

He was accompanied by the deputy minister-designate, Evans Opoku Bobie.

They wished the team well ahead of this month’s friendly matches and also assured the team of government’s continuous support in the build-up to the 2020 Africa Cup of Nations in Cameroon.

Hon. Mustapha further stressed on the need for the players and the technical team to strive to make it to the 2022 FIFA World Cup in Qatar - with the qualifiers set to begin in September, 2021.

Ghana has two International friendly matches against Morocco and Ivory Coast lined up this month.

The Black Stars will take on the Atlas Lions of Morocco on Tuesday, 8 June in Rabat, before hosting the Elephants of Ivory Coast on Saturday, 12 June at the Cape Coast stadium.

The Black Stars have been training at Cape Coast ahead of the two matches.

Jordan Ayew spoke on behalf of the players and thanked the Minister for the visit.

Coach of the team, Charles Akonnor expressed gratitude to Mr Ussif for being committed to the progress of the team.