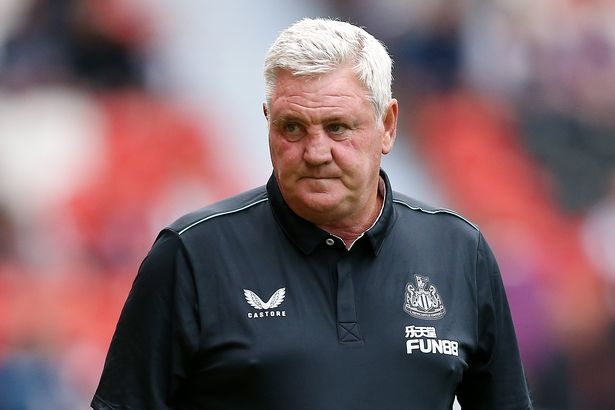 Manager Steve Bruce has left Newcastle United by mutual consent just 13 days after the Saudi Arabia-backed £305m takeover of the club was completed.

The 60-year-old took charge of his 1,000th match as a manager in Sunday's 3-2 defeat by Tottenham - his only game as Magpies boss under the new owners.

Bruce said there had been "highs and lows" and that he hoped the new owners could "take the club forward".

Graeme Jones will take interim charge of the Premier League side.

Newcastle said the appointment of a new manager "will be announced in due course".

Bruce is understood to have received in the region of £8m after his contract was paid up in full.

The Tyneside club have made a winless start to the Premier League season and sit second from bottom after three draws from their opening eight games.

Bruce was appointed Magpies manager in July 2019 and achieved finishes of 13th and 12th in his two full seasons in charge.

"I am grateful to everyone connected with Newcastle United for the opportunity to manage this unique football club," said Bruce.

"I would like to thank my coaching team, the players and the support staff in particular for all their hard work.

"There have been highs and lows, but they have given everything even in difficult moments and should be proud of their efforts.

"This is a club with incredible support and I hope the new owners can take it forward to where we all want it to be. I wish everyone the very best of luck for the rest of this season and beyond."

Bruce had a 27.4% win percentage from 84 league games at Newcastle, which was the ninth best compared to previous Magpies managers who had been in charge of at least 20 Premier League matches.

A Newcastle statement said the club "would like to place on record its gratitude to Steve for his contribution and wishes him well for the future".

The club's next game will be at Crystal Palace at 1500 BST on Saturday, 23 October.

'It's taken its toll on my whole family'

In an interview with the Daily Telegraph, Bruce said: "I think this might be my last job.

"It's not just about me; it's taken its toll on my whole family because they are all Geordies and I can't ignore that.

"They have been worried about me… especially my wife Jan.

"I'm 60 years old and I don't know if I want to put her through it again. We've got a good life so, yeah, this will probably be me done as a manager - until I get a phone call from a chairman somewhere asking if I can give them a hand. Never say never, I've learnt that."

He added: "I wanted so badly to make it work.

"I was so proud to be manager of Newcastle United, even in the dark times, I was determined to keep going and to keep this club in the Premier League."

Newcastle forward Allan Saint-Maximin, who joined the Magpies in August 2019, is one of the side's key players and he said it had been an "honour and a privilege" to have Bruce as his coach.

"You are, without a doubt, one of the most gentle people that I have ever met in the world of football," wrote Saint-Maximin on social media.

"You have been a man of your word, a caring man and a fair man who never hesitated to protect us. I will never forget how you treated me, for that I will be forever grateful."

Bruce's appointment under former Newcastle owner Mike Ashley was met with criticism from fans and he has failed to win them over during his time on Tyneside.

During his final game against Spurs, some Magpies fans sang, 'We want Brucey out' as they made the new owners aware about their feelings about his position.

"Fantastic news, I think every single Newcastle United fan is over the moon with this," supporter Alex Hurst from The True Faith podcast told BBC Radio 5 Live.

"It's been a long time coming, arguably it should have happened at least a week earlier but I think we're not going to worry too much about that now.

"It's a new era for the football club and it was essential that Steve Bruce was moved on."

He added: "No wins this season and, quite simply, if you look at Steve Bruce's record this season but also over the last 38 games as a whole, I think they've won seven of those 38 games, very few football managers in any division in any country would be able to survive that sort of record.

"To put it simply, I think he was yesterday's man. He might have been a good manager 28 years ago but he's not any more."

Former Newcastle defender Steven Taylor spent 13 years at the club between 2003 and 2016 and he had sympathy for Bruce as well as other managers who had been at the club during Ashley's reign.

"The upstairs hierarchy were the ones that were controlling everything that was going on," he told BBC Radio 5 Live.

"There are previous managers that I've played under who didn't want to play certain players, they got told to play these players and that's how it was at the football club at the time. It has been difficult."

Bruce disappointment may come with a sense of relief - analysis

It was always Steve Bruce's dream job to take charge of Newcastle United but he has received a lot of criticism from the supporters, a lot of abuse which I know he feels has gone too far at times.

I think he is a realist. He would have said the takeover from a footballing sense is the best thing for Newcastle United Football Club in terms of the investment it will undoubtedly bring.

I think he is also a realist in that he knew that it would probably mean that they'd want to bring in their own manager and I think in that sense what will be, will be.

Yes he'll be disappointed, any manager would be to lose his job, but I think when he reflects there might be an element of relief as well because of the criticism and abuse that he has received, that he's no longer in the firing line.

It became quite clear at the weekend that the supporters were not going to tolerate such a position for much longer, it's very very hard for any manager to survive in those sort of circumstances.